An average day in my life – Part one

In spite of living in the middle of nowhere, we do seem to lead very busy lives. Not in the:

“Arrrgh I’m late for work, where are the kids? Noooo… Look at the time – now we’re late for school too. Oh damn, I’ve forgotten to put the cat… Did I say cat? No, rubbish out for the bin men!”

Sort of a way. Ours is different altogether, and actually the reasons aren’t usually associated with humans at all. With a notable absence of cities, schools and office buildings, it might therefore be hard to guess why our days zip past so quickly. So what really happens during an average 24 hour period here?

Our nights are usually quite active, but not for reasons that one might imagine, and it involves one of our animals. Brutus, our lovable moggy, alternates between clandestine stalkings,

and sharing my pillow when an emergency nap is required. Generally once, and sometimes twice each night, despite being sound asleep, we’re rudely jerked into consciousness by the sound of a not-so-stealthy pounding up the stairs. We instantly know who it is. But just to confirm our worst fears, the velvety thuds are followed by a succession of mews that rapidly turn into downright meows. This tells us that Brutus has re-entered the building, and requires immediate attention. Jack, knowing what is about to happen, finds the whole process entirely unsatisfactory. It was only the other night when he groaned that it was like trying to sleep in a cat-ridden Thai Buddhist temple (which I’m sure it isn’t), before rolling over and dropping back off to sleep. Then again I can’t say I blame him for this attitude, cat-visits aren’t everyone’s cup of tea.

You might now be thinking, ‘Why on earth don’t they close the bedroom door? Simple – job done!’ I promise you that we have tried that already, but our attempts were quickly foiled. Brutus took an extremely dim view of our clumsy tactic, and developed a masterful and dastardly plan to deal with the situation. On arriving at the closed door in the middle of the night, he proceeded to scratch violently at the paintwork. This was accompanied by a prolonged session of wailing like a distressed baby until, close to hysteria ourselves, we finally let him in. A lengthy session of water-boarding might have been kinder on our nerves during those witching hours. So, being effectively powerless to withstand such successful feline counter-measures, and having some concerns for our door, we have no other option but to give him free rein. 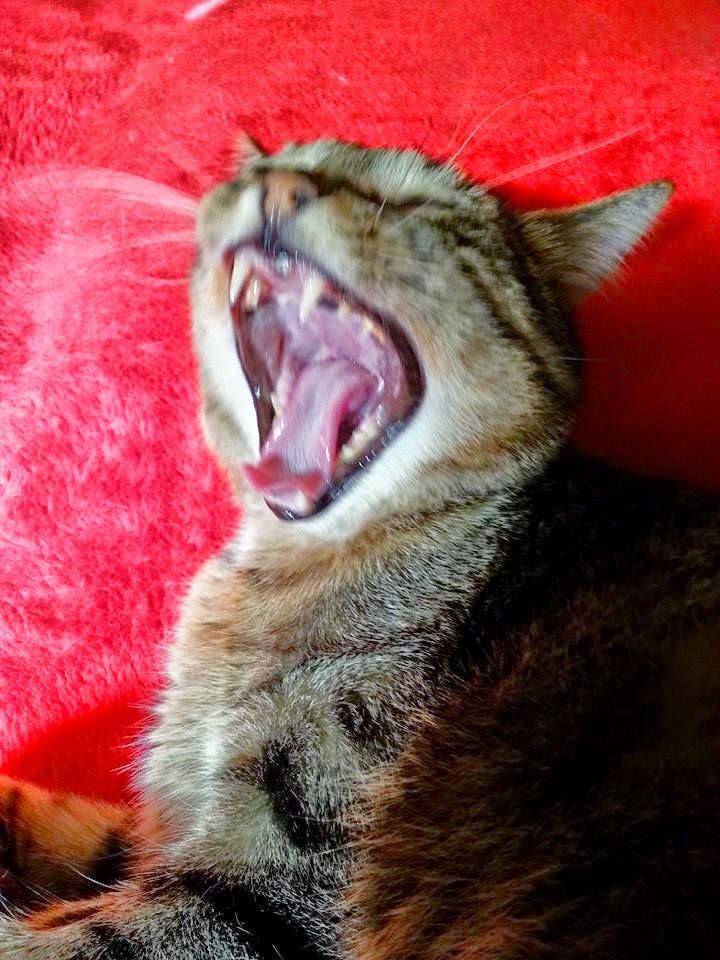 Somewhere between 2 and 4am Brutus usually strolls in, lumbers on the bed and takes his time to find the most suitable spot on the duvet. He is, of course, awake because he’s normally in charge of the night-shift, but these duties can tire even the fittest cat. Eventually satisfied with position one, and being admirably fastidious about personal hygiene, the next job is to see to his ablutions. This is quite a noisy affair involving a mixture of throaty purrs, licks, ‘scrunchels’ and stretches. Not the stuff of human sweet dreams at all. Once that’s dealt with, and the nocturnal detritus has been scattered all over the bed, he’s ready to settle down. A new, cosier position is needed for this. In the winter it’s usually on top of my head which seems to be warm and, up to a point, provides a constant warm air-flow. But during the summer months he’ll switch to a position between Jack and I, where he’ll extend his significant bulk across all available pillows. Several grumbles, grunts and a short pillow-duel later, I inevitably find myself with my head suspended between a tiny corner of the pillow and the mattress. 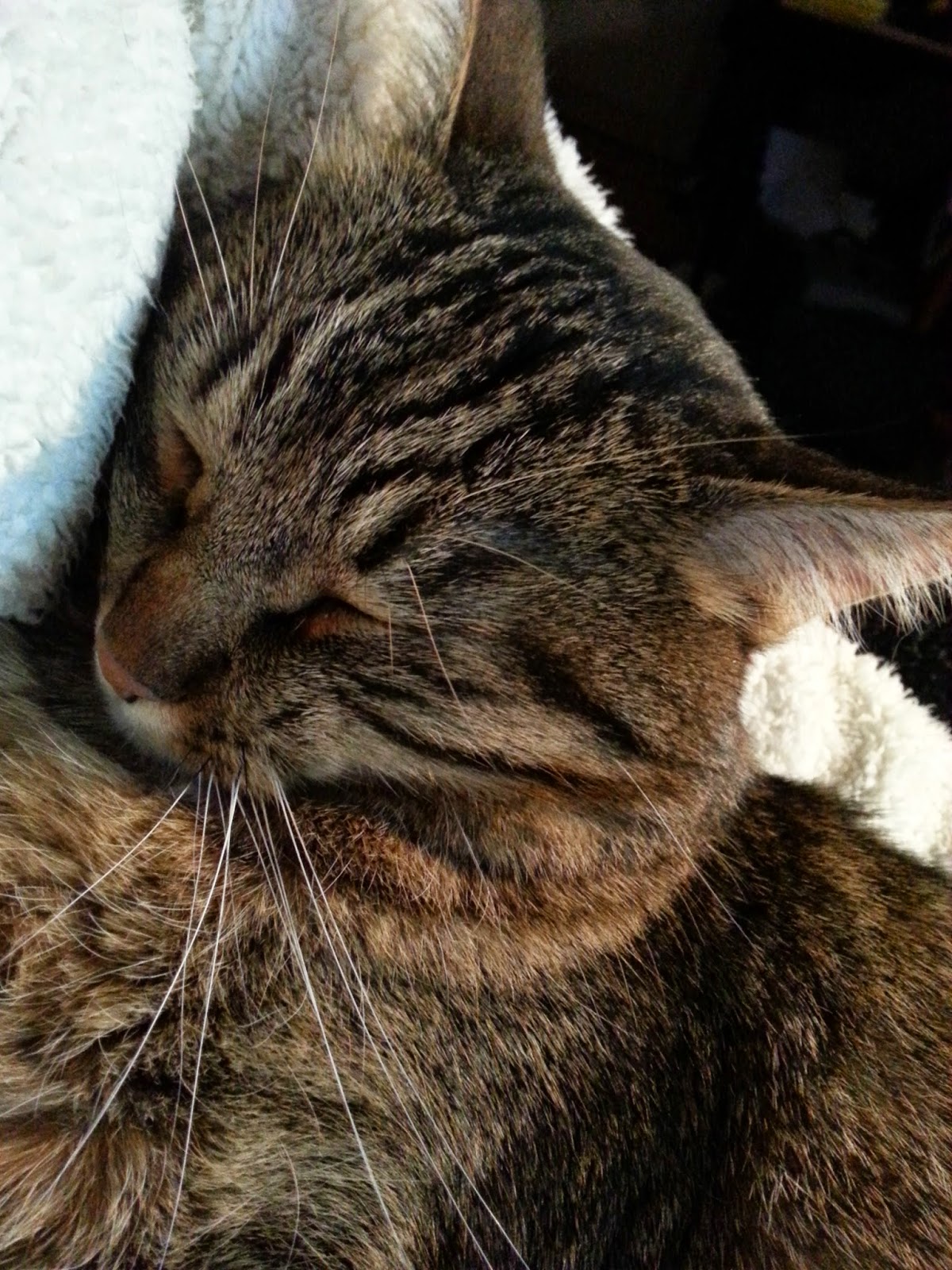 Our fat cat will be lying next to me in an elevated position, vibrating contentedly as he purrs his way into an uninterrupted sleep. Exhausted and disgruntled, I slip back into a fitful doze. 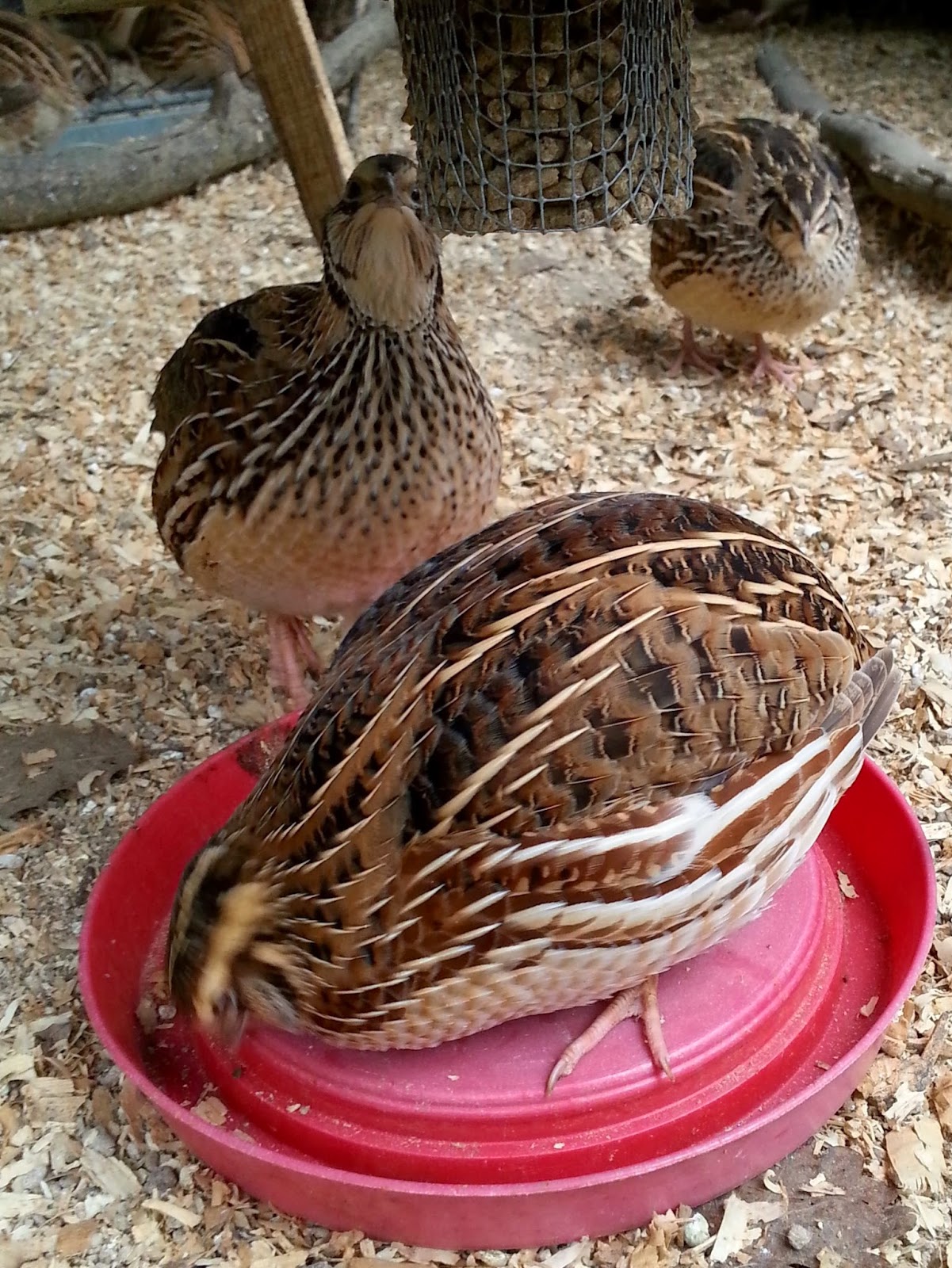 Living where we do in the countryside, alarm clocks are never needed. At exactly the same time, during the summer months we’re awakened by a clamour of noise coming from outside. Bleary-eyed, with a stiff neck and bags under my eyes the size of tyres, I know it’s dead on 5am. The birds have woken up! Tiny though they may be, our cock quail birds are absolutely full of beans. Their triumphant, shrill calls pack a heck of a punch in the vocals department, and cut through the air like a power drill. Not to be outdone, the cockerels crow to their girls and to everyone else in the area. But that’s not all. Our pheasants are awake too, and decide to join in this disorderly morning chorus. So these signals, together with our decidedly less raucous garden birds, mean the arrival of a new day, and the commencement our first set of animal duties. But getting cracking on these is not always that easy.

Making it downstairs to the kitchen can be a bit of a job because, on hearing the first foot fall, the steps suddenly transform into an escalator of fur. 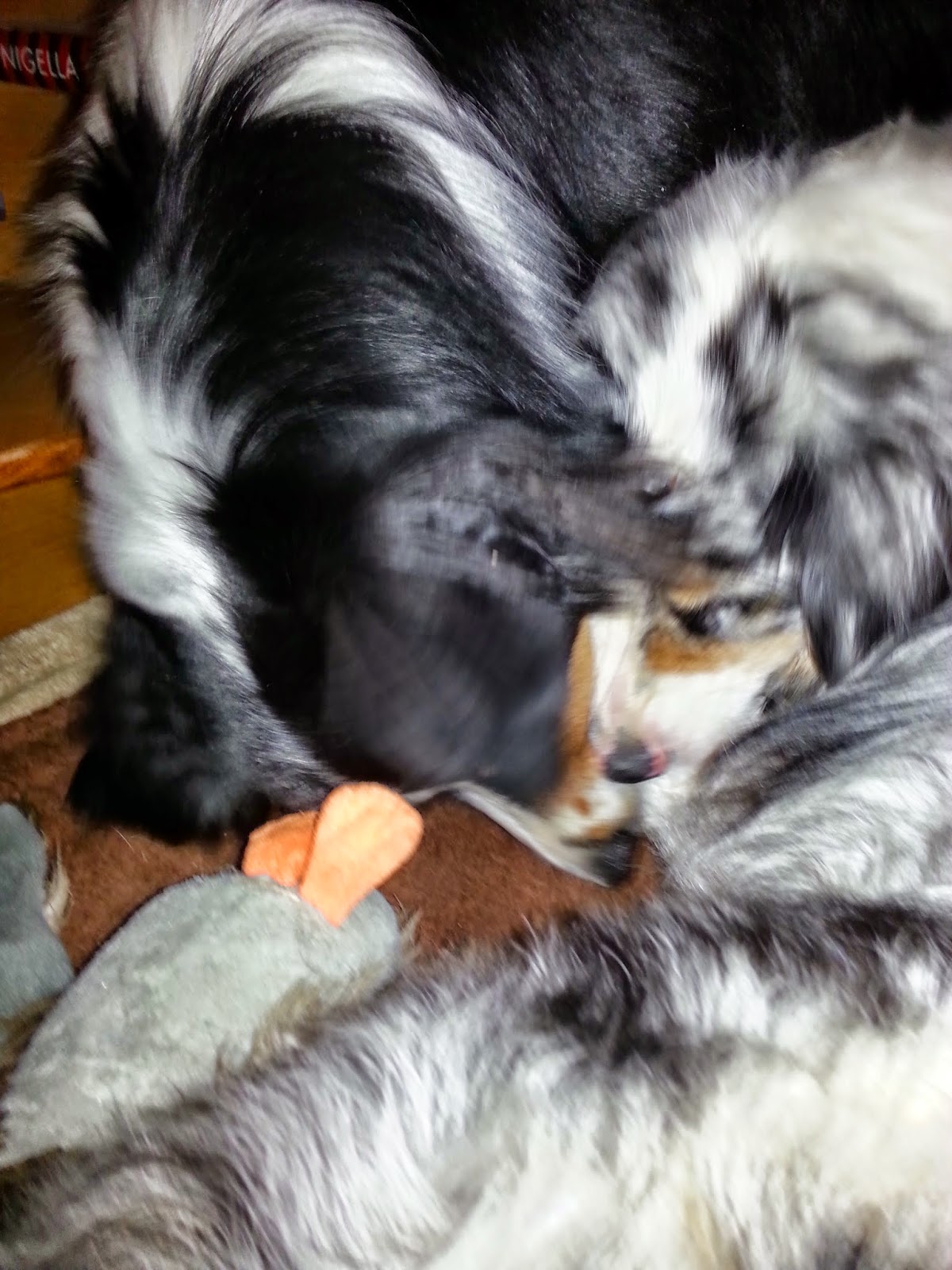 For personal safety reasons I take the precaution of creeping down as silently as I can in an attempt to make it to the bottom before I’m discovered. But my ruse never works. One creak of a step and I’m rumbled. Aby and Max bound towards me, forming a canine welcoming party, and greet me like a long-lost friend. I nearly make it, but such is their level of joy at seeing me after all those hours, that I quickly end up pinned to the bottom half of the staircase, too weak to withstand their affectionate onslaught. I eventually do peel them off, and fight my way towards the kettle. The only thing on my mind now is that essential morning cuppa to help revive my energies. But progress is painfully slow. 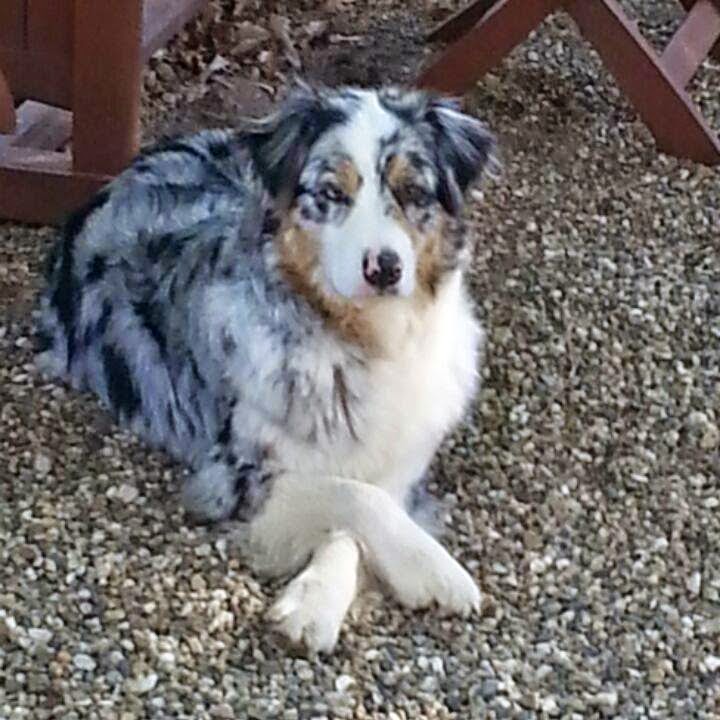 At this stage Hunter still hasn’t joined in the greetings. That’s because he’s stone deaf, and luckily hasn’t heard anything at all. Once satisfied with the staircase cuddles session, Aby transforms into a creature manifesting sweetness itself. She’ll twitter coyly around the edges, generally being desperately feminine. I swear that if she was given a mop and duster, she’d know exactly what to do with them. However, she does have one extremely unfortunate way of demonstrating her undying love for everyone which we can’t seem to stop. Aby will run full tilt at the target person, and plunge her head between their legs. We’re used to it now, but it was this ingratiating gesture that nearly upended poor old Madame Benedict one day, and caused her to turn into a human parachute, as her skirt was inflated by a mass of deliriously happy Australian Shepherd dog. To her absolute credit she managed to remain upright, only gasping “Oh là là” a couple of times, while I rummaged around her nether regions in my attempts to recover our recalcitrant animal.

Max manifests his affections quite differently, but these can be equally challenging. For some reason it’s very important for him to have something in his mouth. If he doesn’t have a dog toy, he’ll lovingly grab at whatever’s handy, which at that time of the morning is usually my dressing gown tie. This leads to a tug of war which he thinks is a super fun early game. During these regular tussles I’ve often reflected on how surprisingly strong he is. Ignoring my sleepy pleas of “leave!” he’ll yank a lump of material, and attempt to drag me, sliding, across the floor as I hang on to my modesty. It’s surprising how little friction a slipper can generate in these situations. I try to stop myself from unravelling completely, and finally summon up the energy to issue a curt obedience-related command which gets him to give up the game. But then, still deeply full of love, he’ll swipe me with a great big lick. This is only marginally less dreadful than the dressing gown mêlée, but every time I shout at him to “stoppit” he’ll peel back his lips, give me a huge toothy smile, and start again. In these circumstances it can be difficult to remain firm. 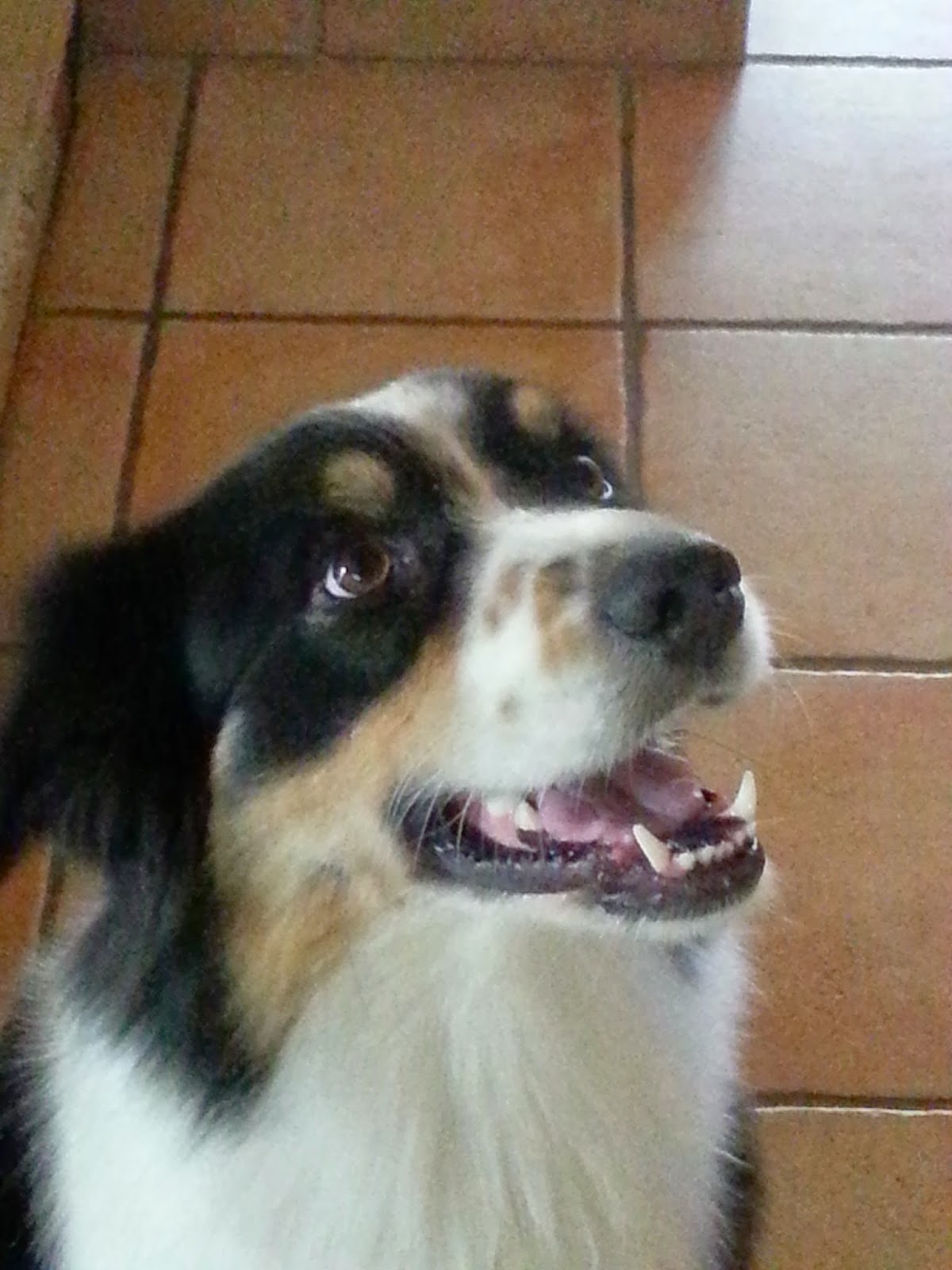 Already a little jaded, and with very damp calves, I finally make it to the kettle. Hunter, somehow alerted by the movement, then wakes up and comes staggering towards me. This causes great tension all round. Hunter is ancient, and we now know to our cost that when he wakes up, he needs to go outside – immediately! Kettle and tea for the time being abandoned, I about turn and direct Hunter (Max once again attached to my dressing gown), and bouncy Aby to the door. Whatever the weather the door is flung open and out pour the dogs to relieve themselves, and join in with the morning chorus. This is my moment. I take a quick peek at the assembled company, and close the door on our canine family members. Bliss!

I’m definitely in need to my first cup of tea now. I take a second to re-wrap myself and head steadfastly towards the kettle, relishing the thought of a light breakfast sans animaux. But life’s not like that here. Just as I’m collecting my mug, there’ll be an imploring meow that comes from behind me. Brutus, wonderfully refreshed from a comfortable sleep is halfway down the stairs, stretching luxuriantly along three steps. I’m pretty sick of him at this stage so continue with the simplest of morning tasks. I’ve just about managed to click the kettle on when he materialises, now winding around my legs. It's no good, I know to my cost that failure to see to his breakfast needs instantly, will end up in a claw-sharpening session on my slippers. I stop what I'm doing, leave the kettle to boil, and dutifully follow the cat to his dish. 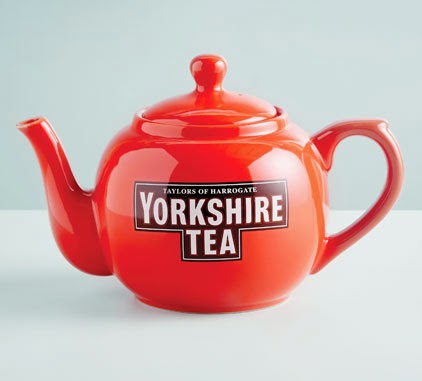 Finally, finally I’m ready to sit down. I now have my tea, my yoghurt and my computer tablet which is bursting to share the headlines of the day. I raise my mug wearily to my lips, ready to savour the elixir of life that comes in small perforated bags from Yorkshire, when bang! I should be shocked but I’m not. Max has been working on his door-opening techniques, but hasn’t quite got to grips with them yet. Instead he head-butts it, a practice he apparently hopes might do the trick instead. Everyone loves a trier. I look round to see three dogs peering hopefully at me, intent on joining in with breakfast. I know that there’ll be no peace for the door unless I do something, so up I get again, let them in and they settle down for a millisecond until Jack comes down. Then the welcome party quickly regroups to produce a repeat performance around him.

With breakfast eventually done and dusted, I mildly wonder whether I felt any different when I was on the school run. Those days seemed pretty hectic too. But it’s already getting towards 7.30am now, and I’ve no idea how it got that late so quickly. Partly revived, I rush upstairs, jump in the shower and prepare myself for the next part of the day.

I’ll bring the second part to you next week. In the meantime I reflect on whether I’d change these animal-related antics for a leisurely life in the city? That’s easy – no I would not! 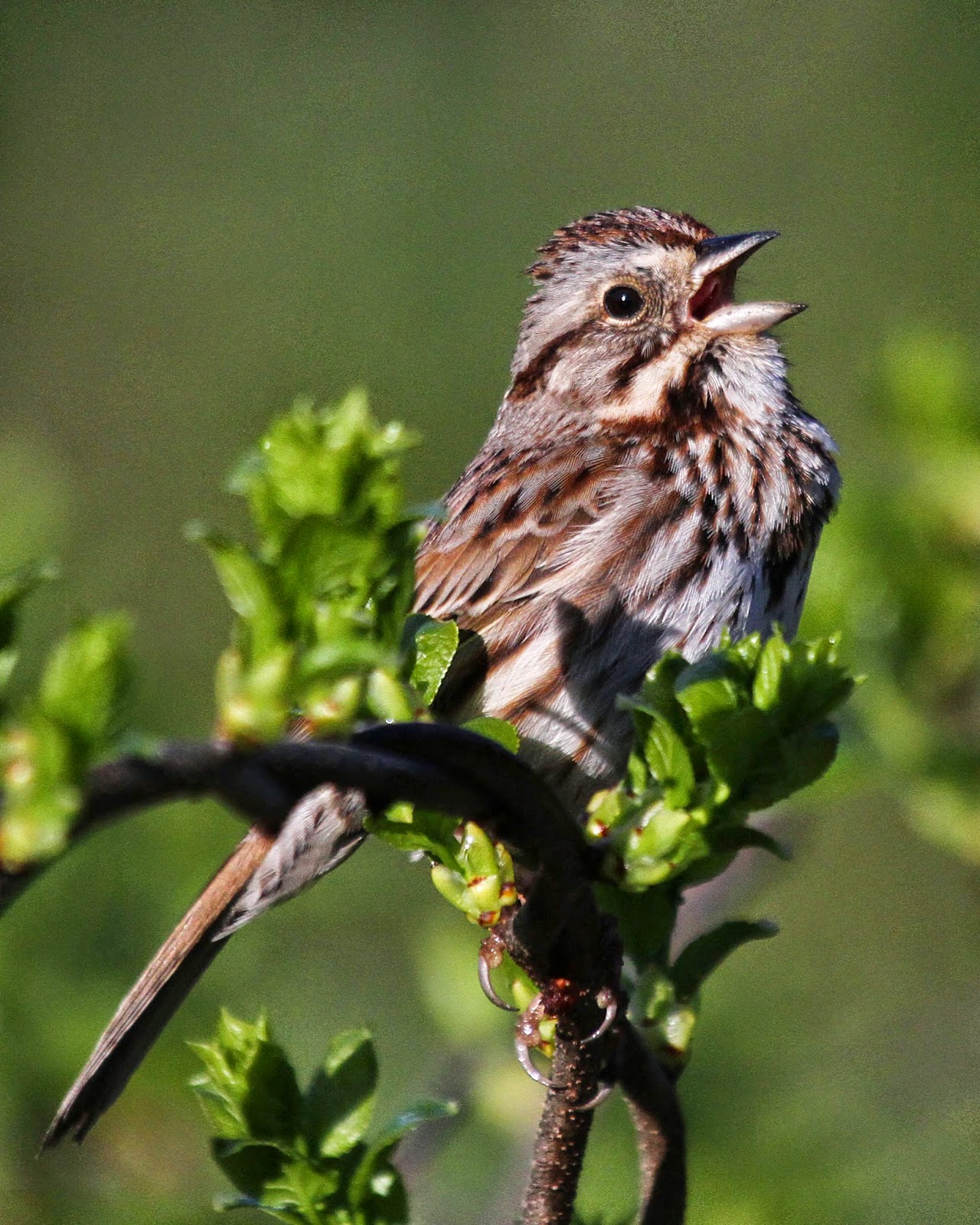