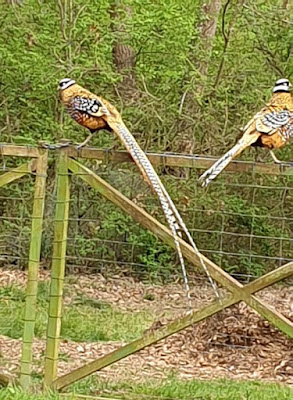 Jack, my husband, and I, had one of our animal chats. They can be tricky. This one started way back in January.

“Jack, how about raising a small group of pheasants this year?”

“Don’t worry, everything’s under control, but I’m concerned our forest group is dwindling.”

“Hang on a minute, I’m constantly being attacked by one of the swines, why do we need more?”

“Honestly, Jack, that’s just one. Anyway, it’s only because you keep invading his territory.”

“Charming! In that case, the sod can feed himself. Mind you, I suppose we do have too many males…”

“Huh, and I suppose you’ll want me to use the incubating machines then? They’ll need renovating and recalibrating.”

“Of course. Thank goodness one of us is technically minded. That would be marvellous, thanks. I’ll start collecting eggs once they start laying.

Romance was in the air with the arrival of spring. Imbued with a sense of amour, our group of penned adult pheasants began courting. A production line of eggs soon followed, which I enthusiastically collected and handed over to Jack for incubating.

Meanwhile, not to be outdone by a bunch of hair-brained pheasants, a couple of our chooks became decidedly broody. This was frustrating. Refusing to budge off their eggs, I was attacked every time I tried to remove them, neatly reminding me that one should never mess with a broody hen. They’re fiendish. Ironically, help was at hand.

By this stage, our incubators were reaching capacity. I donned a gardening glove, sneakily slipped a handful of pheasant eggs under the girls while removing the clutch in situ. Voilà! Poached eggs on toast reappeared on the breakfast menu. 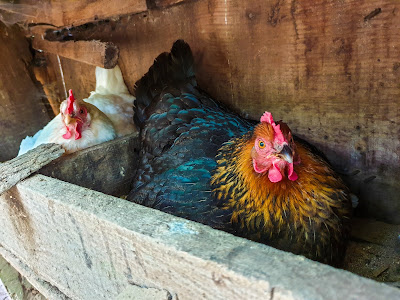 We were incubating a mix of Melanistic and Reeve’s pheasants. Melanistic cock birds are a dark teal with iridescent blue plumage and black-barred tails. The females have a lustrous, almost black plumage. For a species with strong nitwit tendencies, the Melanistic variety is reasonably calm. Big tick there, the downside is they have a tendency to wander. This is a worry with trigger-happy hunters patrolling our boundaries. In spite of this, we decided to breed a small number to help calm the nervy Reeve’s.

Reeve’s pheasants are forest dwellers so ideal for our setting. The adult males are unashamedly flamboyant with bandit face markings and extra-long, flashy tails. The females’ feathering is appropriately discreet. Soft, browny shades meld into a beautiful camo plumage. All absolutely gorgeous, visually, it’s their personalities that sometimes let them down.

These birds definitely need a diet of chill pills. They’re apt to be skittish when immature, and when they reach adulthood some of the males become so territorial they’ll attack humans – like Jack. And, to be fair, nobody likes an aerial attack from a furious, whirring demon with a two-metre tail and sharp spurs. 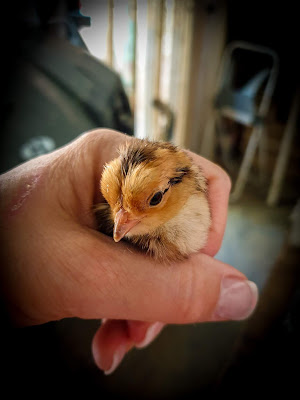 Right on time, eggs started moving and cracks appeared. It’s like watching a magic trick. Out popped chicks who immediately started waddling around: small, perfectly formed fluffy dumplings. Sadly, as is the way of things, it wasn’t all plain sailing, and some got stuck. Luckily for them we had Jack, the midwife, on hand.

For a man who professes to dislike animals intensely, he does a remarkable job at saving so many. The chick unzipping kit was unfurled, on went two pairs of specs – one pair apparently wouldn’t do, and Jack successfully brought every stuck chick into the world.

The incubators were cleaned and put to bed, enabling Jack to return to his far more important work. Machine maintenance and associated oily tasks were on his to-do list. Meanwhile, we had a nursery full of baby birds. They’re mucky, they’re naughty, and they eat and poo copious amounts. It was my job to look after them. 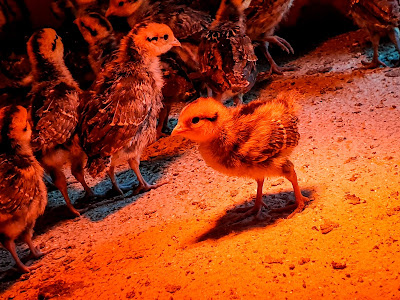 Day by day, I watched as ping-pong ball-sized newborns developed tiny feathers. Aside from oversized feet, everything was still miniature at this stage, although their growth rate was incredible.

While this was going on, we had a happy event in the chicken run. Good as gold, our surrogate mums produced a mini clutch of baby pheasants. They may have been slightly mystified at their appearance, but that didn’t faze them. Instinct took over, and they protected their broods with typically fierce behaviour. 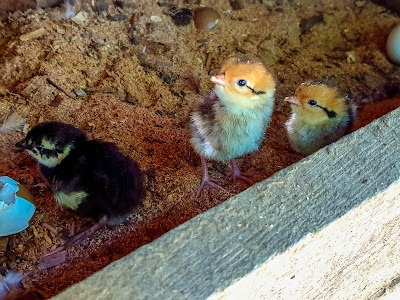 By early summer the chicks had transformed. Downy fluff had been replaced by starter feathers, and the Melanistics were looking like a congregation of vicars with their incongruous white collars. At this stage, it was still hard to tell the difference between males and females, although the bumptious behaviour of a handful suggested we certainly had a bunch of lads on our hands. 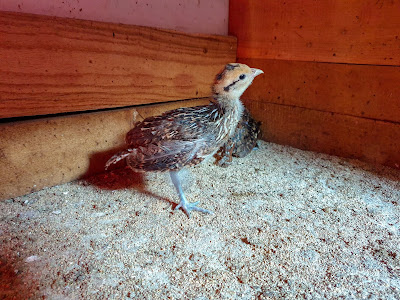 The time had come for the youngsters to be moved from their cosy nursery to an enclosed rearing pen next to their parents. To do this, they had to be caught and popped into animal crates. Sounds ever so simple, doesn’t it? It was, in theory.

I have a serial fear of accidentally squashing the birds in mid grab, so ‘big-hands’ Jack was drafted in to do the job. A couple of issues to point out here.

The conditions for capturing a bird are cramped as one has to reach down and fish around inside the nursery for a suitable subject. There is even less room for the crate holder. Me. It was a boiling hot day. Jack has no patience at all.

“Hell’s teeth, what have you been feeding them on? Obviously the wrong stuff, this lot are crazy!”

“Arrgh! Hold that crate properly, would you? Nooo. Look! Now it’s out again.”

An anguished fumble ensued as we both tried to pin down escapee junior who was in the process of finding out what wings were for. This scenario was repeated several times.

Sometime later, all 54 were successfully boxed and ready to go. And us? We weren’t a pretty sight. I was liberally covered in droppings and I have no idea how that happened. Jack was leaking from several superficial wounds caused by multiple bashes against the nursery edges. As he mopped a bleeding elbow, out came another morose remark.

“I remember why I hate raising birds now.” 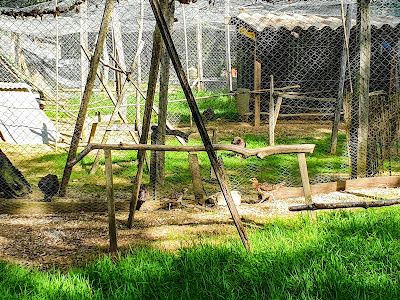 Despite their traumatic morning, our teenage flock seemed positively diverted by their new surroundings. And why not? Exciting green stalky stuff had to be examined. Unusual hard surfaces that sounded crunchy and moved weirdly when walked on. They were fun. Then there were horizontal poles. What on earth would they be for?

With the forest on one side, parent bird pens adjacent, and hens nearby, the newcomers had lots of stuff going on. Their introduction to new things didn’t stop there. Evidently intrigued, Tripod, a three-legged wild boar we have nurtured since he was a nipper, ambled up to his side of the fence with his family to see what the tweeting hubbub was all about. Interesting for the younglings, but only for a moment. Very quickly they got bored with the smelly, grunting beasts and returned to foraging and flying practice. 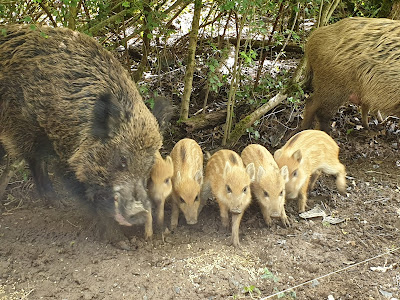 Over the following weeks, my twice daily husbandry visits were made even more enjoyable by the happy arrival of a new batch of chicks from a Melanistic mum next door. I watched them thrive in the hot summer temperatures while I completed my tasks with the teenagers, who were about to learn a first valuable lesson in survival. And it came from an unexpected source. 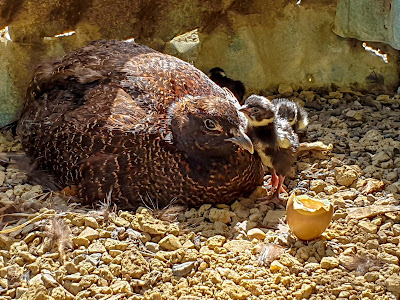 Every time a bird of prey flew overhead, one of the cockerels would crow to raise the alarm. The hens rushed to his side and took cover, but then something else happened. His cries instinctively caused the poults to stop in their tracks and pivot their heads skywards. I don’t know how they knew to do this, but Jack and I had seen it before and knew what we would do.

We were now in the middle of August and it was time to release our young charges to a one hectare (2.5 acres) open-top pen in the forest. Here, they would be safe from furred predators until they had improved their flying skills. They would continue to benefit from a sustained supply of feed and water and have ample roosting cover. 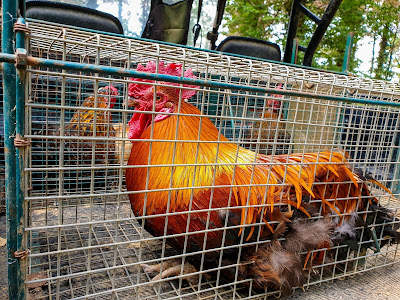 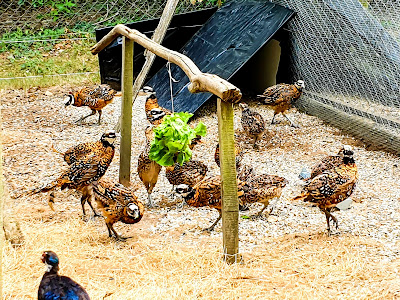 A couple of days before the final transfer, much to their disgust, I caught up our guardian cockerel and his three girls. He’s massive, and they were all grumpy. It was a struggle. I drove them to the forest enclosure and gently deposited them in a smaller pen in the middle. What a transformation! If chickens could smile, they would have beamed. The moment they stepped out of the cages, they started happily clucking as they pecked at fresh grass and scratched for insects. Heaven.

With everything going to plan, it was the pheasants' turn. This can be a tricky process. The birds were now a few months old, healthy and very agile. They had to be netted and boxed. It was likely to be another test of Jack’s patience. 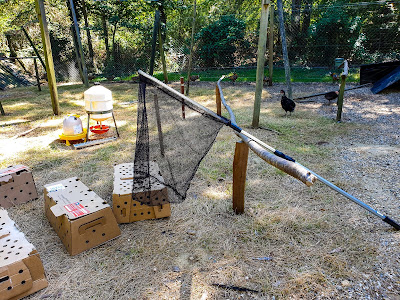 It’s one of those times when I was mightly relieved we have no close neighbours. The sight and sounds of a swearing Jack sprinting around the pen with a net in hot pursuit of a panicking poult are not elegant.

I ignored the howls of, “This is a waste of time, they’re all bloody males. You do realise that, don’t you?”

I also ignored the, “For crying out loud, do I have to do everything myself? I said, herd them towards me, not away!”

I nearly managed not to giggle when, breathless, he finally stopped and threw his net on the ground in a tantrum. It was a magnificent moment, one I so wish I’d caught on camera. Instead, I mildly suggested it might be my turn to net, and we eventually caught up the last of the feathery crew. Several trips later all the crates were in the open-top pen. We opened the lids, left them to it and crossed our fingers. This is always a horribly tense time. All that work, those cute little fluff balls now beautiful young things. Our kids. Were they going to survive?

The following day I only saw a couple of pheasants. It’s a big area, so I expected that. I checked the feeders then opened the little pen door. Out came Monsieur le cockerel with his girls ready to examine his new territory. 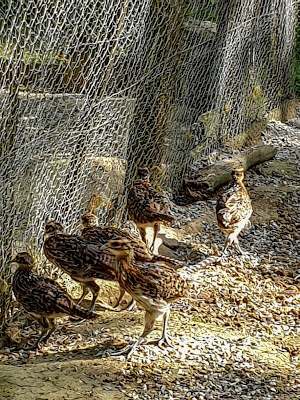 Fast forward two weeks and, goodness, how things have altered. It’s impossible to count them, but it looks as though most of the pheasants have now made their home in the open-top pen. As always, they have gravitated to the fencing where they patrol and fly in and out as they wish. Better still, every time I have checked, the cockerel has been in the centre of his greater flock, and I know very well that if he sounds the alarm they will all run for cover. 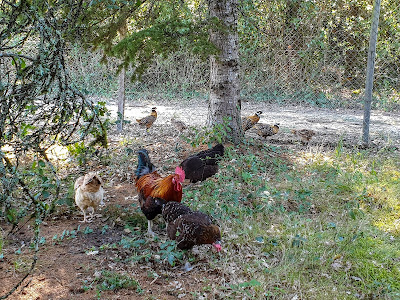 Our pheasants were born to live. We’ve tried everything we can to make sure that happens with a continued supply of food, water and hope. If they successfully integrate with the existing small group, our job is done. Aside from the odd ambush (poor Jack), having these birds grace our forest is like living with birds of paradise. Fabulous. 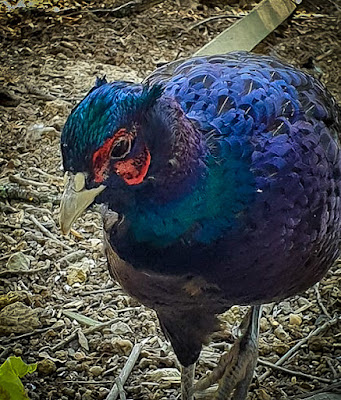 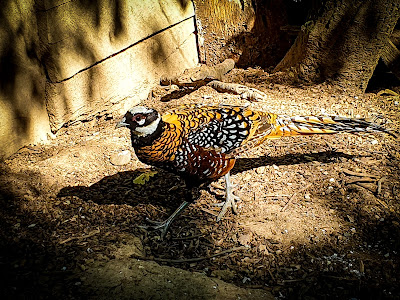