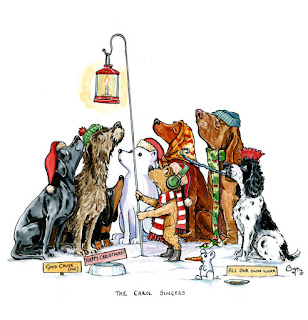 Would we sing at a carol concert on the 12th  of January? Yes, was the reply, but I did wonder why it wasn’t being held – you know, during Christmas.

Evidently, I was the only one who thought it might be a relevant point. I suppose I shouldn’t be surprised. After all, most Christmas decorations don’t come down until the end of the month in our part of France. Come to think of it, some stay all year, gently gathering dust in preparation for the next round of festivities.

There’s a history to this date conundrum. Our friend, Camille, and her chums from other parishes, needed to find a date where four churches were available for the service on the same day. For the past few years, this had always fallen on the second week of the new year.

The idea of the concerts is for villagers to begin at their local church and then hop into cars and drive to the next one. The same for singers. By the time the final venue is reached there exists the potential for a substantial gathering, many choristers and lots of confusion.

Of course, I agreed, including my husband, Jack, saying he would love to join in too. Although prepared to do his bit for the village, he steadfastly refused to attend the practice session. I can’t say I blamed him. He’d been before. 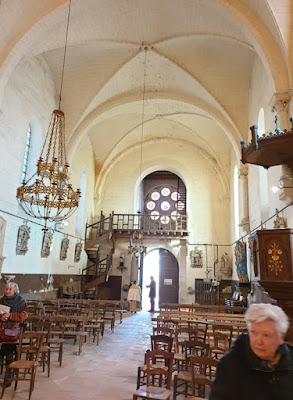 Along I went to our local church on a freezing cold day. The heating wasn’t on, no problem for us hardy country folk, I had thought, we wouldn’t be there long. Organisers and a handful of other singers soon arrived. Our plan was to sing through the programmes, which would be different for each church.

Camille handed out a sheaf of papers containing all the carol lyrics. So far, so good. Then the fun began.

Madame from church one also handed out a sheaf. It was different. A high-speed exchange in French instantly took place between the two competitive ladies. It was one of those where chipping in with helpful comments was not required. Finally, an accord was reached.

Camille announced the newly-agreed order of play. This included les anglais (us), who were to sing a different carol in English in three churches. Les brésiliens (our pals), would sing a Brazilian hymn in a fourth. We got cracking.

The practice started fairly well until madame from church three caused a commotion mid-carol by yelling out a number. It happened during each one, which I’ll admit was a bit off-putting. It wasn’t until I spotted her staring fixedly at her watch that I realised what was going on. Madame was timing each carol. An excellent idea, sadly flawed as there were many pauses. 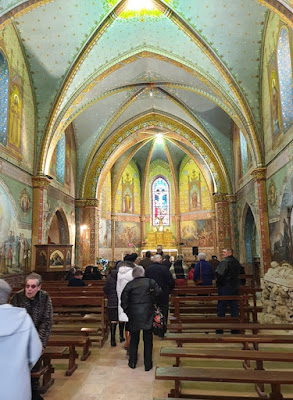 Reasons for these included starting off in either too high or too low a key. Re-starts followed in more or less the same register. The discovery of differing lyrics between papers caused further mid-carol dilemmas. More re-starts.

Impromptu debates later sprang up as to whether harmonising was required, or indeed possible. Then two of the ladies took it upon themselves to act as conductors, which inevitably caused additional timing issues. A lot was going on.

Our practice eventually ended over two hours later. Most of us were so cold our feet had given up. We shuffled out, croaking dragon’s breath au revoirs and creaked back to our cars – arms filled with heavily marked papers.

Not wanting to let the side down, Jack slaved through all the different song sheets. His goal was to produce one legible programme, but it was hard. Trying to get them in order, deciphering my arrows and scribbles in margins was trying his patience. If he’d been there, he’d have understood. 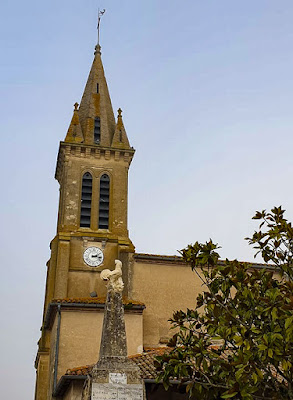 The day came, and we duly turned up ten minutes early at church one. It lies in the heart of the village, a striking, simply decorated building with a tall spire, which complements the vaulted ceiling interior.

First things first, we admired the crèche nestled in the chancel. Each church has one, sensitively constructed by parish families. Goodness knows how old those beautiful figurines were. 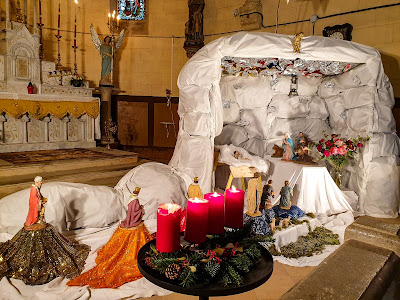 The conductor came up to us, checked our posh new schedule and tutted.

“This has changed now. Can you sing ‘O Holy Night’ instead of ‘O Little Town of Bethlehem’, please?”

We had been blindsided before we’d begun. Jack looked stricken.

“Certainly, do you have the words?” I said.

“Yes, but in French. Can you sing it in English? We need two verses.”

“I’m sure we’ll be fine,” I assured her, somewhat surprised by the appearance of a drummer. I felt sure there hadn’t been drumming the last time we sang that carol.

The congregation came in, and we got underway. At a random moment in the programme, our conductor pointed at us. Evidently, it was time. 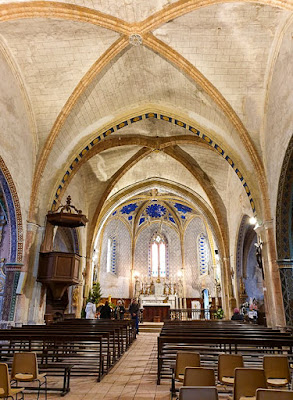 We launched forth with a standard form of the first verse lyrics and an inventive second. Jack, determined to give it his best shot, ended particularly loudly on a high note plucked from nowhere in particular. It was a cracker. Stunned expressions from the flock quickly turned into admiration. They liked it.

Fortunately, the drummer had kept his sticks at bay during our effort, but now they came into their own as we sang that golden oldie, ‘Little Drummer Boy’. It may not have featured on our schedule, but to hear the children sing along to the rhythmic rrrat-a-tat-tat was delightful.

Church one had been a success. Off we all went to church two, with clock watch lady beaming. Primary mission accomplished. We had finished on time. 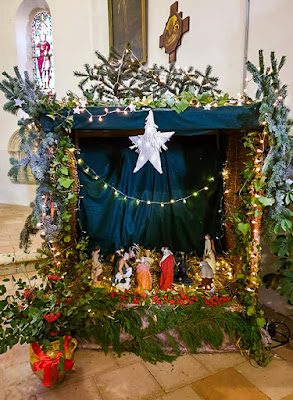 We arrived with more attendees and singers to find Camille already there. She was all of a bustle. After clucking impatiently around the participating youngsters, she arranged vocalists into a special order. And we were off. Well, most of us.

Jack stared accusingly at me. I shrugged. Nope, this carol wasn’t on our sheet, there hadn’t even been a hum of it during our practice. It must have been a late entry and was perfect for what happened next.

Nicely on cue, shepherds, kings and a munchkin angel processed slowly down the aisle, bashfully singing a French children’s favourite. Parents, anxious for their younglings, crossed their fingers, proudly watching. We all did. The spectacle ended as they gathered around the crèche, it was enchanting. 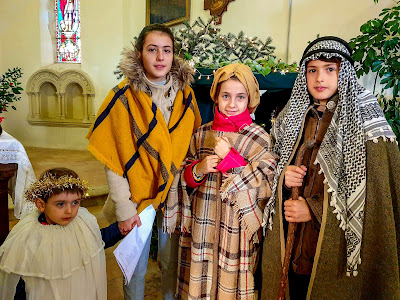 As the main programme began I developed a sneaky feeling that something was amiss with my fellow vocalists. It started with disgruntled shuffles from the ladies either side of me. Then, halfway through, one of them broke off and marched to the other end of the choir. It wasn’t a subtle move.

At the end of the piece, a couple more peeled off, leaving me on the end. Looking at the lady next to me, I had to ask.

Ah, that was it. Camille had stuck me in among a group of alto singers, and I was putting them off. Since the concept of harmonising had been abandoned, it wasn’t blindingly obvious why this should be a problem. Nevertheless, it was only polite that I should move. Since there was still lots of paper shuffling going on, I quickly slotted in amongst the higher-voiced crew.

Performance over, including our anglais piece, which Jack attacked with great vigour, we were off in convoy to church three. I confess this is my favourite. Murals lovingly painted by a parishioner many years before, the interior of this old place has a remarkably intimate ambience. 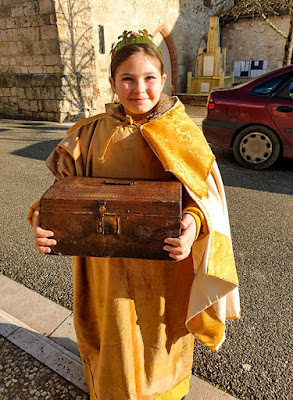 As we approached the bevelled entrance steps, the choir mistress burst out. Small panic. One of the kings was missing. We had a quick scan to find her wandering around, happily showing off her gift to latecomers. She was speedily shepherded back to join Joseph et al. 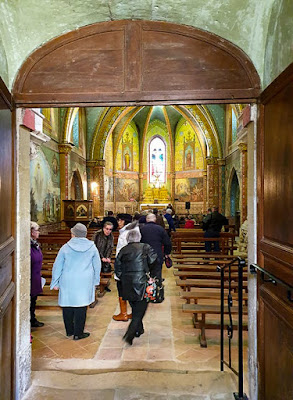 As the church filled, we organised ourselves in the correct order in front of the chancel. In contrast to the other churches, this one was hot, boiling hot. Sensitive to their parishioners' needs, gas heaters on tall stalks were arranged in a semi-circle around the steps directly behind us.

Getting sweatier by the note, we galloped through a couple of crowd-pleasers. Now it was our Brazilian friends, José and Ana’s, turn. We joined the congregation to cool off and enjoy their piece. 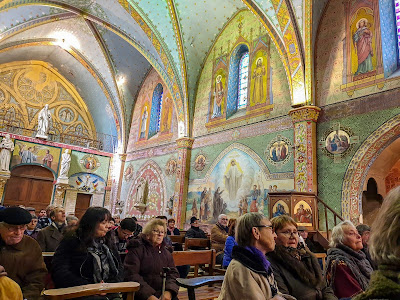 José had brought his guitar, which was a lovely idea. He didn’t have a strap for it so needed to use a chair for support. One was duly produced. There wasn’t a sound in the church as he positioned his boot for the first strum.

José had broken a strut on the chair. The sound zinged out like a bullet ricocheting off the arched ceiling. Unsighted attendees at the back cowered in their seats. Poor José was mortified. Conscious that the show must go on, someone retrieved the splintered pieces of chair and gestured for him to continue. 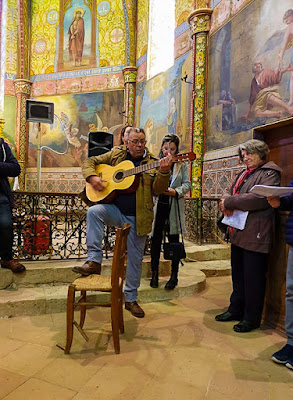 Refusing to chance a second disaster, José was forced to place his clodhopper on the chair seat, thus causing even greater embarrassment to our gentle friend. We could have wept for him. In spite of all this, the piece he played was soulful and very beautiful. He and Ana did us proud.

It may have been a struggle at times, but we’d managed it. The programme concluded to grateful applause. We left with scorched necks and the end in sight.

The sun shone as we entered the tiny fourth village. The lofty church was already filling quickly as ancient-of-days, middlings and the young poured in. While we waited for the final stragglers, those echoing screeches of chair legs reminded me how excellent the acoustics are in this church. 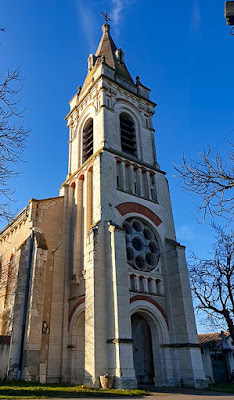 We sallied forth in a least two keys, eventually arriving at more or less the same one by verse three. The next carol was announced as numéro huit sur la feuille de chanson de l'église, which was unfortunate since we didn’t have a number eight, or a church song sheet. But we did know the tune, or so we thought. 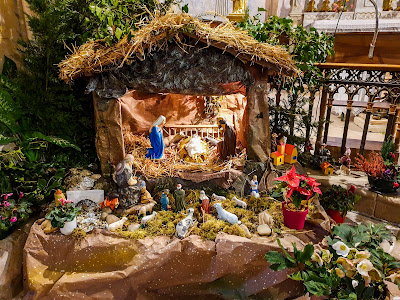 We burbled vaguely until a spare sheet was rifled and passed along by the sopranos. There were lots of verses. By the final one, we felt we’d nailed it. Jack, in top form, belted out another one of his high notes. Out it rang, quite marvellous, completely wrong. It seemed the last verse was sung a little differently. No matter, his efforts were much appreciated.

Our Christmas carol concerts were over for another year. Taking time to admire the final crèche, it crossed my mind there was probably a secret competition going on. They were all winners to my mind, as were the children, each as cherubic as they were intended to be. 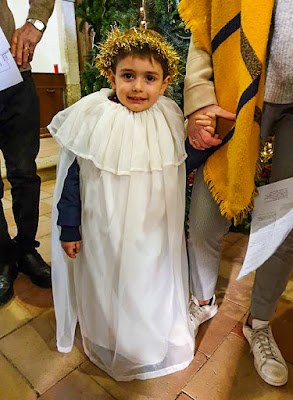 We parted company with our fellow choristers, promising to do better next year and pledging to stand in the right places. Christmas carols in January? Yep, it had been another eccentric example of our charmed lives here in this sleepy corner of France. And we’re so grateful to be included. Events such as these always end on a high note. 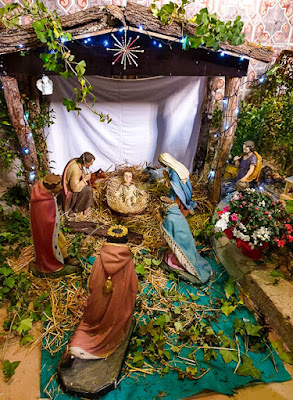