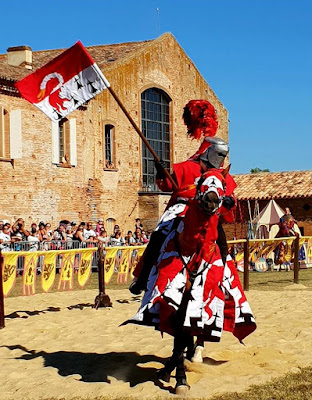 Did my misanthropic husband, Jack, fancy going to a fete celebrating medieval life in our part of France? No, of course not. Did I persuade him to go? Yes, but there were caveats. There would be a strict time limit to our attendance, and we would have lunch at his favourite (quiet, barely anyone there at all) restaurant on the way home. Deal.

Di, my sister, joined us and we set out early on a hot morning to our venue, Belleperche Abbey. I’d read about this place and was dying to visit.

Established in 1143 on the banks of the Garonne, Belleperche was founded by the Argombat knights. In association with other families, they affiliated it to the Cistercian order to create a large establishment, which they hoped to profit from. 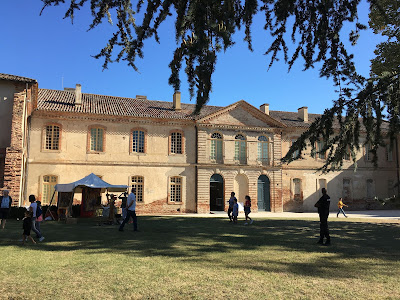 Belleperche became one of the wealthiest abbeys in the south of France during the 13th century. It owned between 8000 and 9000 hectares (19,768 – 22,239 acres) of land and specialised in wine production, cattle, horse and mule breeding. But it wasn’t all plain sailing.

Historical events played their part in the Abbey’s relative success, the most significant of which occurred during the French Revolution.  Monks’ estates belonging to the French church were confiscated as national property, and the monks moved from the premises in 1791. Belleperche was auctioned off and owned by a succession of private buyers. 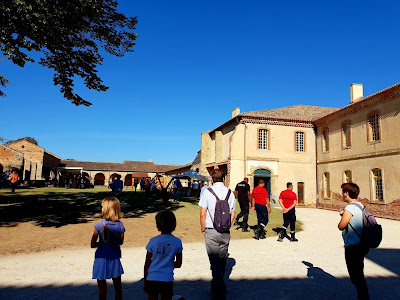 In 1983, a project to turn the central portion into a nightclub unsurprisingly caused a cultural uproar. The Tarn-et-Garonne General Council put in a purchase bid for the building, including the section housing the cloister. Happily, it was accepted. Belleperche was given essential restoration work, enough to preserve the bones of this once majestic group of buildings.

Today, as well as being a national treasure open to the public, Belleperche is home to a museum and hosts several cultural and arts festivals during the year. Today was the medieval event.

We arrived and were directed into a field. A short traipse across the grass led us to a serene, tree-lined avenue filled with the scents and sights of medieval France. There were no trappings of modern life here. 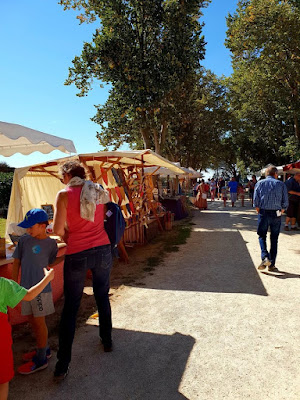 Sheltered beneath graceful boughs of mighty trees, folks were selling authentic wares. First were the makers of arms, shields and various gruesome tools of war. Did we want to buy a sword? This sparked an early interest with Jack. Grudgingly, he admitted even he couldn’t think of a use for one, although, perhaps. Possibly. We dragged him away in case he developed a sudden inspiration. 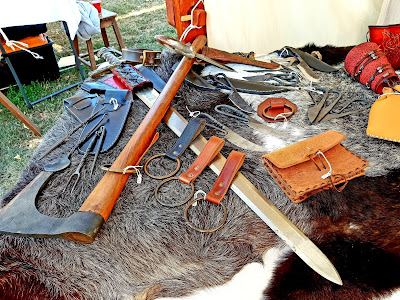 There were trinkets, charms, and handy utensils made from antlers – I quite fancied one of those butter knives. We learned from the apothecary about the natural forebears of modern medicines. Some of those herbal remedies did seem more compelling than their modern chemical equivalents. 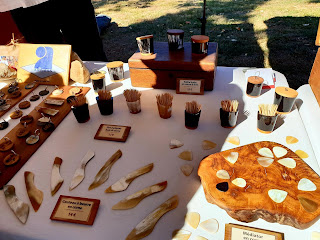 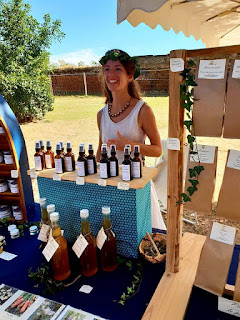 The daily dependencies between humans and animals during the Middle Ages was focused on here. Dead or alive, animals were of crucial importance, as aptly demonstrated by another display – the tannery. 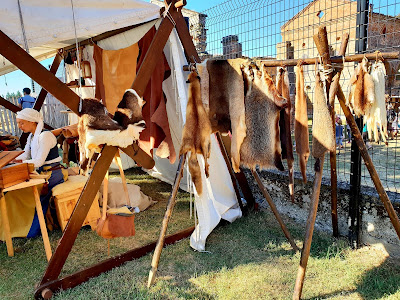 After butchering, the skinners, curriers (who dressed and coloured the hide) and specialist artisans would work to transform pelts into a multitude of different items. Learning about the age-old processes was fascinating. Clothes, harnesses, household utensils, they could all be created.

Strange smells alerted us to a new exhibit. Was it witches brew? It certainly looked like it. We peered into the Halloweeny pot, mesmerised by the bubbling matter, trying to guess what it might be. A lady, who I certainly wouldn’t mess with on a dark night, strode up and put us out of our misery. 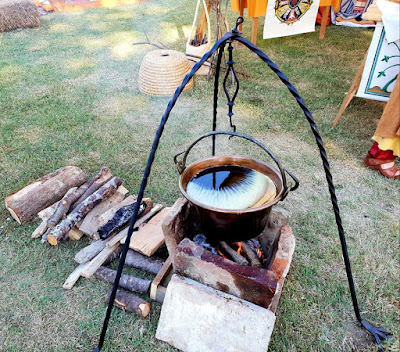 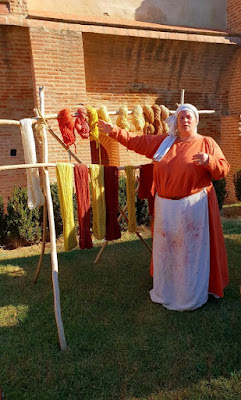 The pot was filled with a heady infusion of mixed veg and spices. But it was not for eating. This was for dying wool. She showed us the technique involved, and several yarns, which put a whole new twist on that well-known phrase: here’s one I prepared earlier.

Onion skins created the bronzey-yellow colour, as did turmeric. Blues came from indigo and woad, and browns from walnut shells. The possibilities seemed endless. We were amazed by the ingenuity and resourcefulness of the folk from this age.

My animal-attuned ear was alerted by bleating. Close by, we found a mini-farmyard with pigs, sheep, goats, cattle and assorted fowl. These would have provided materials for clothing and food, or both. 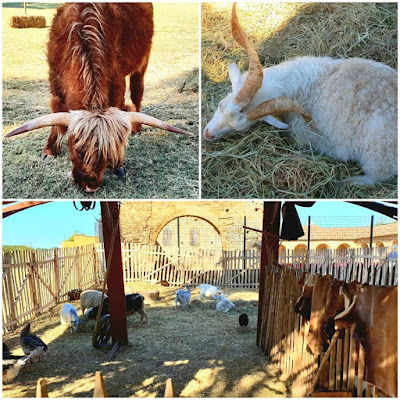 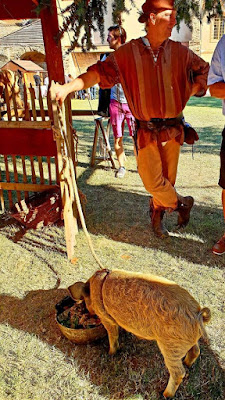 I’ll confess to spending a while oohing at each healthy critter, watching the hairy hog tuck into an enormous breakfast and admiring the gorgeous cattle. They looked suspiciously as though they had come from the Highlands of Scotland. Perhaps they had. I was eventually dragged away to another happy surprise.

We walked through the magnificently constructed cloister, it was the one used by monks in the 12th century. We trod those very same flagstones. Just imagine! Our historical meditations were disturbed by the sound of squawks. 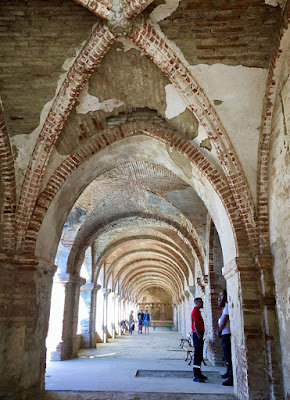 Residing in the shade of a ruin, birds of prey rested regally on wood bases. Well, nearly. There were owls, hawks, falcons, buzzards and one having a bath. It was that which caught my attention. Situated at the back, the bird couldn’t care less about the admiring spectators. It splashed, flopped around and generally made a mess. 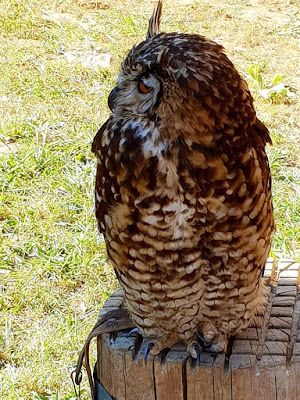 At first, it was impossible to work out the species, or the size. All I could be sure of was it was a whopper and loved water. Then it raised its head and the penny dropped. We were actually looking at a bald eagle. This species, with a wingspan of up to 2.3 metres (7.5 feet), was chosen in 1782 as the emblem of the United States of America, because of its longevity, strength and majestic looks. I decided it was a fantastic choice. 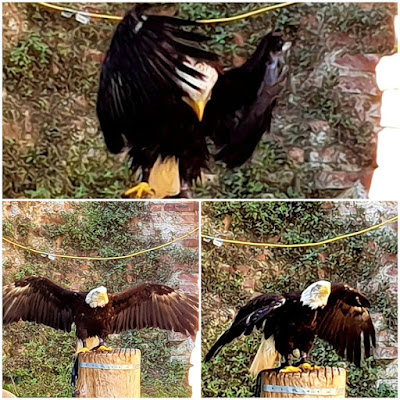 We grilled the falconer about each bird, the skills involved in caring for and hunting with these fabulous creatures. His love and respect for the birds was evident from the way he described them, and also their health. They all looked in prime condition. Sadly we would miss the planned falconry display, but it had been a huge treat to see such proud creatures close up. 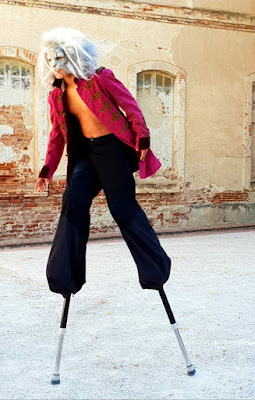 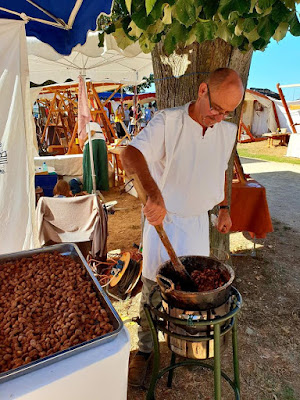 Our attentions were distracted by clamouring pagan music and an extraordinary-looking jester on stilts. Wearing a catlike mask, he strutted up and down cajoling us to join the players. Unable to resist his invitation we followed, pausing only to grab a bag of sweet roasted almonds, they were seriously yummy. 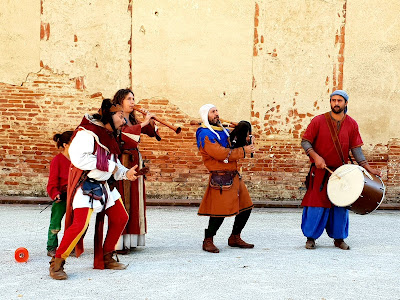 A merry band of jongleurs drummed, fluted and strummed atonally. In medieval times they would have been court attendants or perhaps travellers for hire, who recited, sang or performed other acts for the audience’s entertainment. This would likely include jugglers and conjurors. This day their repertoire included a raucous announcement of the display I was desperate to see. The jousting match. 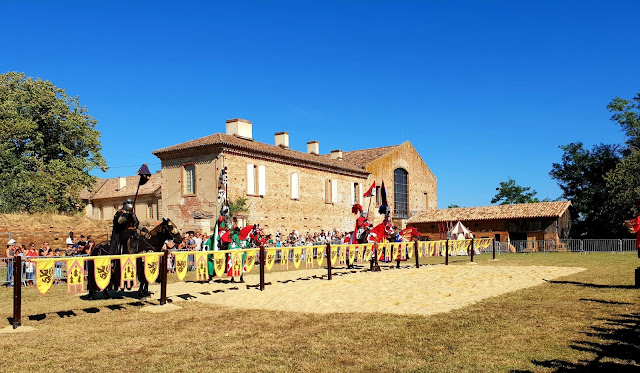 Crowds of us were ushered onto a playing field that looked incongruously like a set from a Harry Potter Quidditch tournament. Di and I, thrilled to the core, unashamedly elbowed our ways to the front leaving Jack, mystified as to why we were so interested in a bunch of grown men galloping around in circles on horses, sitting in glorious isolation on the wall behind. 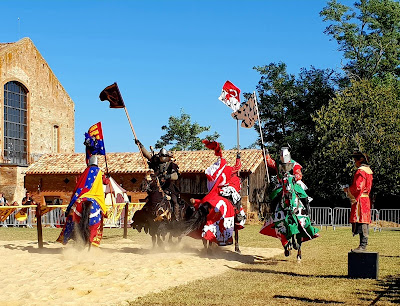 The marshal of the field, whose job it was to referee such matches, grumpily called us to order. We were a medieval mob. He set the ground rules, some of which included matters of health and safety. We were soon to find out why.


Four knights rode onto the tournament field in full regalia. They were splendid. Two pairs, they would go through a series of death-defying challenges to determine the winners. We watched, gripped, as a duo approached. It seemed one knight was the baddie, the other a shining example of chivalry. Their steeds were equally different. One looked ready for a nap while the other was extremely perky. And came close, very close. We were grateful for that sturdy rail.

Tension mounted as a squire arrived to prepare his knights for their first flight of challenges. This gent neatly dispelled any erstwhile romantic thoughts I’d had about squires being young athletes, bounding around their masters energetically, bristling with lances and shields. This chap was solid. Mind you, it’s just as well because the first test definitely wasn’t for the faint-hearted. 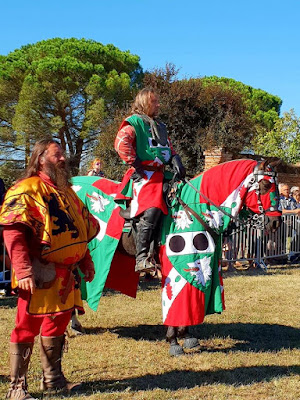 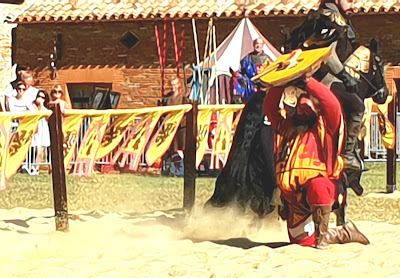 Our sturdy squire took his place halfway down the jousting area and held up what looked to me like an unreasonably tiny shield. One after the other, each knight galloped at full tilt towards him and hurled an axe at the target. Splintered wood, embedded blades, both evidence these were authentic weapons. Their skill was incredible to see. Each knight confounded or triumphant, dashed past to line-up again. Those chargers had excellent brakes.

Other, similarly thrilling trials were followed by arguments with the referee about points scored. Then it was time. The sharp implements of havoc were traded for blunt-ended lances. Helmets were donned, ribald jeering was dispensed with. The jousting began. 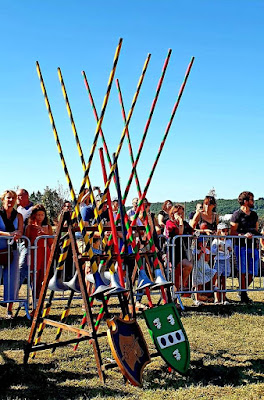 The primary aim of jousting was to replicate a clash of heavy cavalry. Each participant would ride towards his opponent at high speed and try to strike him. The objective was to break the lance on the opponent’s shield or jousting armour or unhorse him. Apparently, participants experience close to three and a quarter times their body weight in G-forces when the lances collide with their armour. Just imagine that blow! 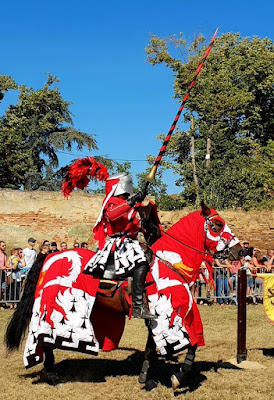 Two knights faced one another at opposite ends of the competition field. Cries went up as the referee thrust his flag in the air. Their blood was up. The steeds, energised by the cheering throng hurled themselves, full gallop at their opponent.

Lances aimed for the heart. 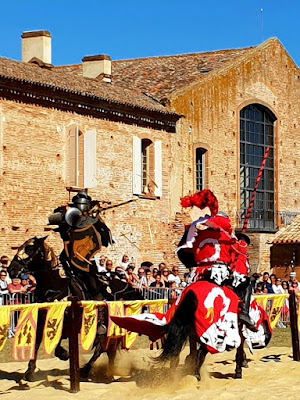 We watched, aghast as the weapons found their targets, splintering on impact. No injuries, but it was as real as could be. Places were changed, knights girding their steeds to battle. Pounding across the sandy base, kicking up dust, on they charged. 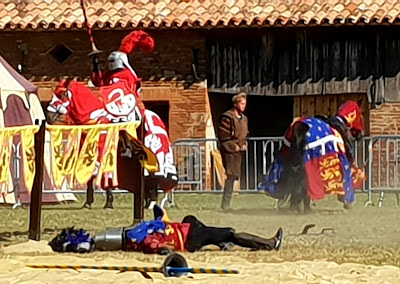 A rider was unseated. Crashing to the ground with a spectacular crunch! We watched, alarmed as his horse carried on at full pelt towards the spectators. Would it jump over them? Fingers were hastily unwrapped from rails as the charger came to a practised grinding halt. That was a relief. Those safety instructions well heeded. 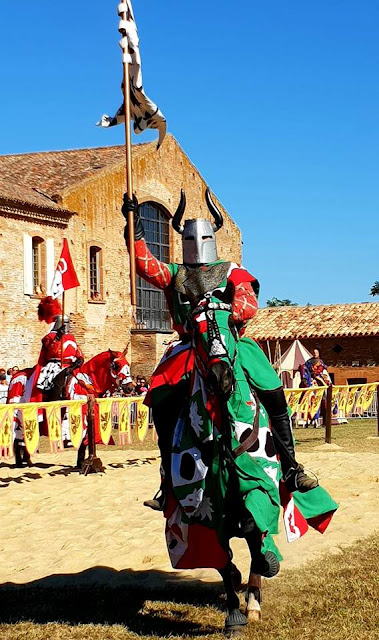 Battles continued on foot. Lances traded with swords by the unseated knights. Baddie versus goodie. Our mob cheered on the black knight, he was gloriously evil. Steel clashed, sparks flew as swords scythed together. Grunting and bellowing in the searing heat, this was frighteningly effective combat. Sadly our rogue lost, but he was a dark hero in all our eyes. 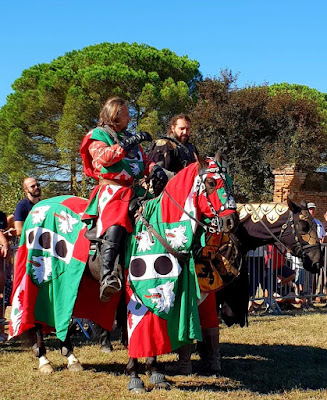 The match ended, and winners were declared. The tournament arena was alive with cheering as the knights paraded one final time. Their horses, still utterly magnificent in their finery, were looking ready to do it all again. Well, aside from the nappy one. He seemed ready for a quick kip in the shade. 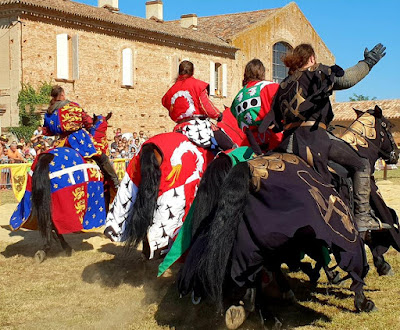 Our morning was up, and it was time to honour Jack’s side of the bargain. As we walked back down that graceful tree-lined avenue, Di and I chattered excitedly about the gorgeous horses and excellence of the riders. Even Jack, trying his best to be unimpressed, had a word or two to say about the robust weaponry. Yep, there had been something for everyone the day we had gone medieval at Belleperche Abbey.
Posted by Beth Haslam at 03:33 6 comments: