Does spring bring out the gardener in you? It certainly does me. Whenever time allows, I’ll be out there, sprucing up borders and resuming my annual battle against weeds. This includes my arch enemy, the dreaded couch grass (Elymus repens). A determined miscreant with creeping underground stems, it’s almost impossible to get rid of, and we have masses of the stuff.

Far more pleasurable is working on the shrubs and perennials. They get a good early feed and general titivation. Not forgetting the veggie patch, I’ll dig it over yet again, which is an awful job with our heavy clay-based soil. Meanwhile, my little greenhouse has been in use since February. It’s now bulging with a variety of border plant seedlings and baby legumes. 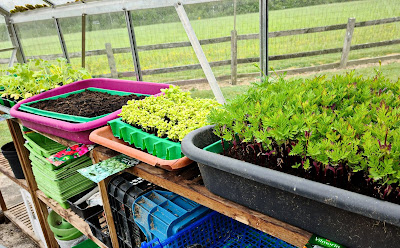 With the basics in place, it should be a matter of settling into the usual maintenance jobs. But it never quite works out like that. Like lots of my gardening friends, I always find room for some more plants.

It might be a shady corner that needs perking up or a pile of discarded rocks crying out to be remodelled as a rockery. My last effort was to create a stone border next to our château ruin. Even my gardening-hating husband, Jack, approved of that one. 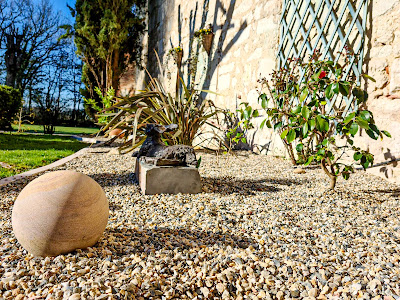 And, of course, there is always a need to replace plants that have had their day. Happily, at our place, the potential is almost limitless. The obvious solution is a trip to the garden centre.

When we moved into our French home, I had no idea where the nearest nursery was. I used my fumbling French to ask advice from our forester, Nathan. Keener on trees than flowers and understated about everything, he made a suggestion calling it ‘pas mal’, not bad.

I recount that first visit in my latest book, Fat Dogs and French Estates Part V. Here’s an extract that describes what I saw when I arrived.

Following Nathan’s advice, I turned off the main road onto a dirt track. Assuming this must be wrong, I was about to reverse when I spotted a couple of stray urns. They looked gardenish. I continued around a bend, and there it was.

Wiry briars held abandoned vehicles hostage. Savannah grass corralled rickety towers of pallets, and weeds sprouted through infinite numbers of plant-holders. There was vigorous plant growth going on here alright, but not the type I had anticipated. Fearing the term ‘garden centre’ had a looser meaning in French – like ‘shambles’, I parked next to a thicket.

Unusually, it had a rusty plough in the middle. I followed the chipped pot-ridden track towards a collection of voluminous, moth-eaten polytunnels.

Tumbledown though it looked, La Jardin Pépinière Delacroix, run by two brothers, quickly became one of my favourite places to shop. The prices were ridiculously low, and I never left without a couple of leafy cadeaux.

It is still my favourite horticultural venue and with lots of new plants needed, last Monday, I set off on a buying spree.

A feature of our sleepy part of rural France is its constancy. Change is considered gradual, and rather like a good wine, it develops slowly. As I pulled up close to an ancient farm implement embedded in grassy scrub, it struck me that not much has altered since my very first visit. But there have been some recent improvements. 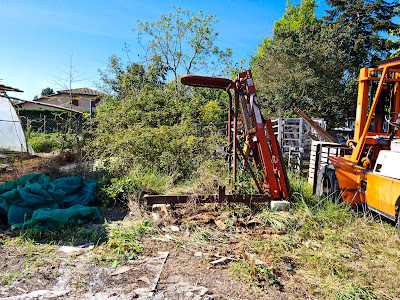 Last winter, the brothers had a purge on the entry route. No longer do us shoppers sprain ankles and accidentally jettison purchases on the way back to our cars. The path has been levelled and the jumble either side looks much tidier.

Having raved about this place in my book, I thought it might be fun to share this visit with you along with some photos. But first, I needed permission. I hunted around and found Christian, the younger brother. Here was another change, quite a dramatic one at that. I had never seen him looking so neat. We exchanged pleasantries, and I asked my question.

“Shall I keep my bib on? I have just been in a meeting.”

That explained the dapper look, although I’m not sure what the bib was all about. I took my photo and headed towards the confusion of greenhouses and polytunnels. This is a magically misleading place, where at first glance, it looks as though there might be three, perhaps five at most. That would be wrong. 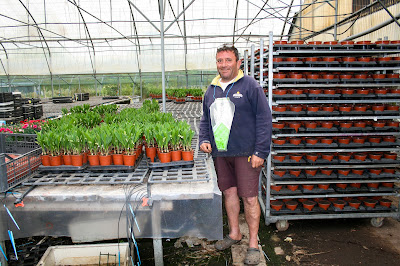 The labyrinthine layout belies its size. Some of the glasshouses are part of the main building. They house the interior plants, where temperatures alternate between jungle-hot and boiling. It explains why shorts are de rigueur.

Outside, the structures are solar heated. They are ventilated by a combination of openings at either end, tattered holes in the covers and several which look like dinosaur rib cages where the polythene has shredded. There are lots and lots of these, as I found out during my very first visit. 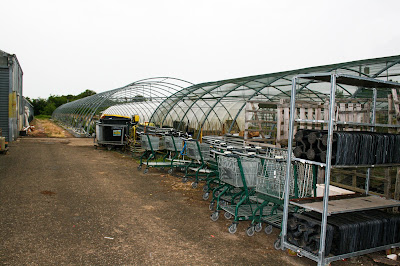 I had wanted to buy geraniums and asked where they were kept. A chatty lady took me along a weed-sheet covered track with rusty rails on top. We passed at least three pairs of ribby polytunnels and stopped at a lane.

This was where I thought my faltering French had failed again. I double-checked.

We crossed the lane, and sure enough, there stood another collection of motley tunnels. The deliciously lemony peppery fragrance hit me before I saw the plants. Battalions of perfect specimens were lined in colour and type rows. Others hung from the ceilings in containers, just ready to be plucked off hooks and settled in homes. I was in heaven.

Nowadays, being a regular, I know my way around. Since this is the kind of inspiring place where it pays to browse, I removed a layer of clothing and started by mooching around the tropical sections. 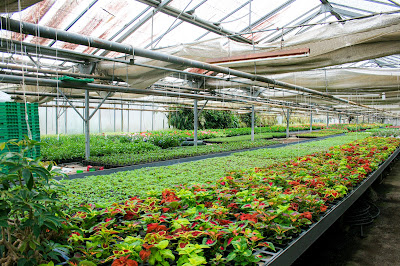 While the furnishings may be a tad shabby, the same cannot be said about the plants. There are acres and acres of them, all as pristine as their neighbours blossoming next door. It’s a feast for the gardener’s eye.

Crepe paper bougainvillaea, striking azaleas, begonias and orchids lit up one area, as did the hibiscus with their wonderfully extravagant petals. Two of those somehow found their way onto my trolley. An unmistakably pungent scent drew my attention to a different spot.

In France, May 1st is Labour Day. The French celebrate with a national holiday and often give a bouquet of muguet-du-bois (lily of the valley), to loved ones and friends. It is a symbol of good luck and love. There is always one left on our doorstep. We still have no idea who the kind donor is, but it’s likely to have been bought from here. 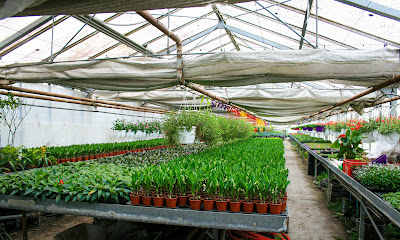 Oceans of red petunias filled another greenhouse along with the blue spotty varieties I tried last year. They had received a mixed reception. Nathan thought they were diseased, and Jack assumed I’d taken to buying artificial plants, which he approved of since they wouldn’t need watering. I thought they were very cheery.

Snuggled up to the petunias were a group of statuesque Arum lilies. Sensational swirls of colour, including coy pinks, decadent creams and virgin whites with cheeky yellow centres. The creamy white ones are hugely popular here. Many are grown by drainage ditches and ponds, providing a flash of colour for passers-by.

I dragged myself away from the hothouses to search for the plants I had come to buy. Having recently excavated heaps of couch grass from a patch of lamb’s ears plants (so named because of their shape and velvety texture), I wanted to in-fill with ‘oeillets’, (dianthus), to help thwart the weeds.

These popular little beauties, also called pinks, belong to a family of plants, including carnations, and are characterised by their spicy fragrance. They come in a variety of colours and can flower for ages.

A lady I had never met before was watering in one of the polytunnels. I asked her to help, and off we trekked towards the geranium zone. Halfway there, she stopped and slapped her forehead, which seemed strange.

“Of course, madame, I know you now. L’anglais! My husband gave you some partridges.”

“Oh, I am sorry, I had no idea Monsieur Guirbel was your husband.”

“Yes, they were his cadeaux when you allowed him to pick mushrooms in your forest.”

“That’s true, it was very kind. We tried to refuse, but he insisted. They are beautiful birds.”

“He has many different types now. Do you like Japanese quail?”

“Then you must have some!”

“Definitely, you must. When will you come back here?”

“Well, I’ll be back next week for my geraniums, but, honestly, madame, there’s no…”

“Good. That’s settled then. I’ll tell my husband you will have some. How many do you want? Ten? Twenty?”

And so the conversation went on. It was the typical kind of exchange we have here in our small community – often confusing, always warm and convivial. Madame refused to discuss money; it would be their pleasure to give us another consignment of feathery gifts.

I’d love to show you photos of the dianthus, but my hands were soon filled by the choices madame selected for me. A complete tunnel was filled with multi-coloured little ‘uns, including the mauves, which madame liked best. I ended up with three of those. 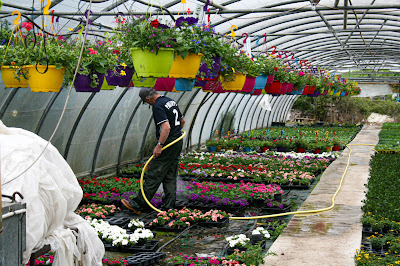 With my order complete, we headed for the checkout via the monster potting machine. I have no idea how old it is, although similar to their other contraptions, it looked a bit dicey. I hoped not. The nursery has thousands of potted plants. It would take an army to prepare them all by hand. 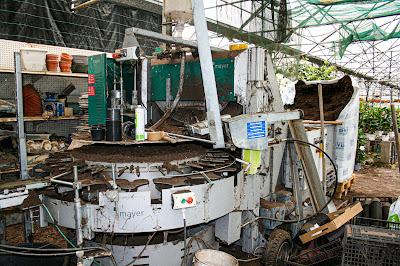 We passed through a hanging basket section. Hundreds of containers quietly brewing, ready to be shipped to local businesses and doting new owners. This one has an unusual outcrop of what looks like an unkempt jungle sprouting out of one corner. Somehow I hope they never tidy that up. 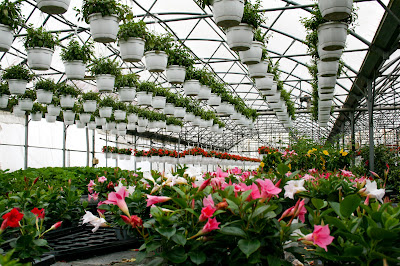 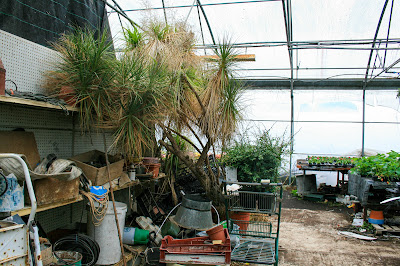 We reached the magnificently chaotic payment desk with a deadly fridge lurking in the background. It has never altered. Coins are chucked in plant pots, notes are stored between pages of a horticultural encyclopaedia or in pockets, and the credit card machine is usually gummed up with soil. 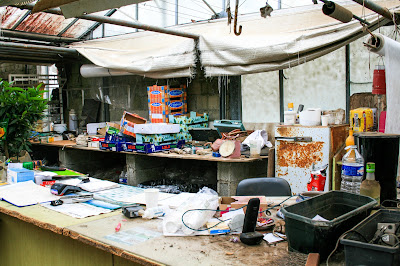 Christian appeared and muttered something to madame as she totted up my bill. She nodded and stuck the empty seed packet covered with squiggles under my nose to confirm the price. Something wasn’t right.

“Ah no, madame, you haven’t charged me enough.”

“I have. You must have three oeillets as a cadeau with our pleasure!”

With remonstrations being pointless, I thanked them and left to the calls of ‘Au revoir à bientôt!’ Goodbye, see you soon! Anticipating a fun gardening session ahead, I couldn’t help smiling at the generosity of these lovely folks. With my geranium stocks to pick up, not to mention a confusing number of chubby quails, there’s no doubt I can’t wait to go back!