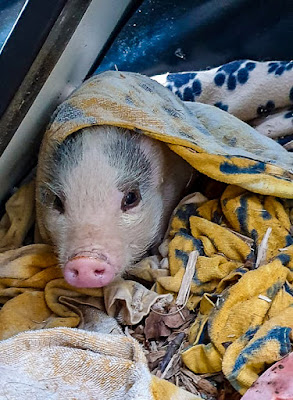 I’ve been taking time out to make a start on writing the next episode of our adventures here in France. It was supposed to be – you know, tranquil, peaceful, that kind of thing. I should have known better.

“A funny looking rabbit then? I’m looking at the pic on my mobile phone, and your photo is too awful to distinguish.”

“I know, sorry, it was sprinting.” 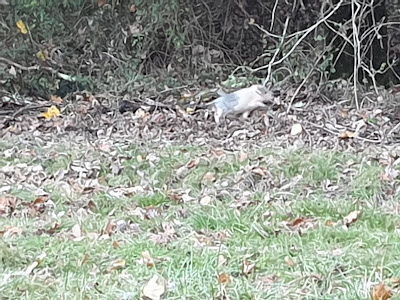 The story began with Nathan, our French forester. Here’s the English version of our chat. Well, I say chat, but as you’ll see, Nathan is a man of few words.

Nathan is excellent on tree IDs, but not some much with animal species. He could be widely off the porcine mark for all I knew.

“Are you sure? Can you describe it?”

It suddenly occurred to me what he was talking about.

“Did it look like the one we rescued before?”

“Goodness! Where is it?”

“In Constance field by the lane.”

“Oh dear, that’s huge. And the fence is two metres high. How on earth did it get in?”

“It must have been thrown into the field and abandoned.”

“What a shame. Thanks, Nathan. I’ll go and investigate.” 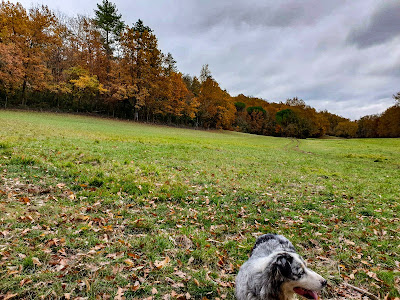 If Nathan was right, it sounded like the young Vietnamese pot-bellied pig we’d found in a similar spot last year. At the time, it caused uproar among the hunting community.

A couple of roaming shooters spotted it over the fence and decided we were involved in a clandestine hybrid wild boar/domestic pig breeding programme. This was an interesting concept, but one that was flawed by physics. Why? Because mini pigs are just that. Mini. It would have required a stepladder and excellent balance to procreate.

After several enquiries, the owner was found. He said it was an escapee wedding present for his niece. Although this had sounded like a tall story, we nevertheless reluctantly told the man to collect him. The expression on his face when he arrived caused us to question our decision. We still regret giving the little chap back.

I discussed the latest situation with my husband, Jack. Grumpy through and through, when there’s even the slightest hint of animal mistreatment, his gruff exterior falls to pieces.

“The poor little blighter. If Nathan’s right, we can’t possibly leave it down there.”

“I’m pretty sure he is, his description was fairly piggy.”

“What is wrong with people? It makes my blood boil when this kind of thing happens.” 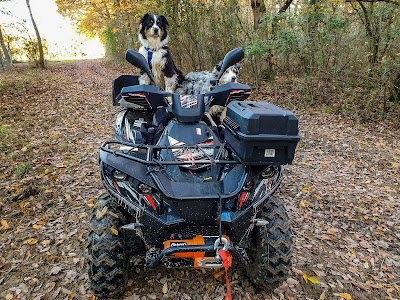 “Mine too. Let me see if I can find it, then we can decide what to do.”

“Good idea. Take the quad bike, and by the way, for goodness’ sake be careful when you’re changing from low to high gear. That lever wasn’t designed to be yanked backwards by someone with the finesse of a Sumo wrestler.”

There’s always an instruction of a mechanical kind where my husband’s concerned.

If there’s something our dogs, Aby and Max, love, it’s an adventure. And what they possibly love more than anything else in the whole wide world (food aside) is a trip on the quad bike.

Max, being a kind of hash it, bash it type, frequently self-harms by accident. For that, as well as general safety reasons, both dogs wear harnesses when they go quad biking.

The moment I took their gear out of the box, they started whining excitedly. Max hit meltdown pretty quickly by unhelpfully dashing off and throwing himself in the general direction of the quad bike. 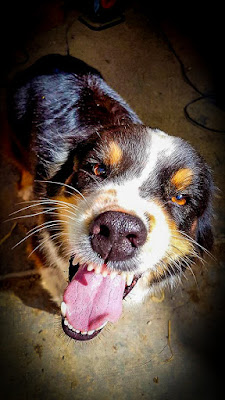 Ending up in a furry heap on the ground, as usual, he neatly belied my regular claims about the vast intelligence of Australian Shepherds.

Smiling bashfully at his latest mishap, he managed to control himself for long enough while I attached the harness. Aby, despite whining like a leaky kettle, stood perfectly still, offering a paw to slot into her dainty kit (Max’s being a heavy-duty affair – of course).

And we were off, me with two dogs riding pillion, on a mission to find a piglet.

Down through the fenced woods we went, scanning all the way. Ten minutes later, the forest trail took us across a bridge into Constance field, so named after one of the previous owner’s daughters.

Constance is a magical pear-shaped five-hectare (12+ acre) meadow. It’s a place where deer graze, pheasants stroll, and buzzards hang glide way above. And as night falls, a handful of rumbustious wild boar might break cover, intent on causing havoc to grassroots and one another.

Protected by woodland, and a brook bordering one side, the lane runs parallel at one end. We trundled along the main track. Max spotted something, alert, dead keen, yelpy. Nice try, but no, it was deer. Then I glimpsed our quarry. Our size assumptions were way out.

Di’s later description was apt. The animal was tiny. It could easily have been a big guinea pig or rabbit. Nathan was right too. This was no wild boar, it was a piglet with pink skin and dark splotches. 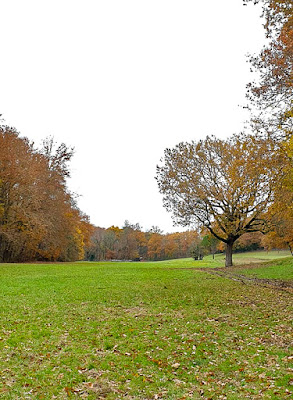 I pulled up as close as possible. Leaving the dogs on the bike, I approached on foot. But it was no good, the animal was terrified. I tried a couple more times with no luck. Rather than alarm it further, I took a couple of photos and left to brief Jack.

“All animals look cute to you.”

“Well, not all, but you’ll love this one. We can’t possibly leave it, the little mite will never outrun a fox or male boar, and it’s freezing down there at night.”

Jack and I set humane box traps, with the newcomer viewing from a distance. Our lure was a mixture of corn and chopped up apples. In our experience, no pig can resist yummy treats like those.

We retreated and paused to see what would happen. The piglet crept up to the cages, no doubt filled with a mixture of suspicion and fear. It patrolled each but didn’t venture in. This was going to take a while.

A couple of days later the phone went. It was Jack.

“Aww, it must be freezing. Okay, meet me at the pheasant pens, I’ll bring a towel.”

“Honestly, Jack, your humour is worse than awful.” 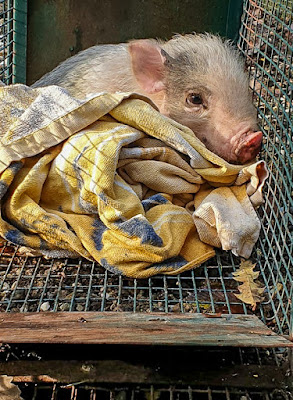 I dashed down to the aviaries and quickly prepared an empty pheasant pen. Lush grass was growing, and the lean-to shelters would keep it dry. Would the perches be used? Nah, pigs don’t really fly. I shovelled in fresh wood chippings and put down food and water.

Jack arrived with what turned out to be a young male. He was very thin, scared stiff and freezing cold. I popped in the towel as we opened the trap doors in case he decided to stay there. No chance! Out he galloped, to the far corner of the pen.

With temperatures dropping quickly and rain on the way, I laid the towel in a lean-to on the wood chippings. We left him to settle in. 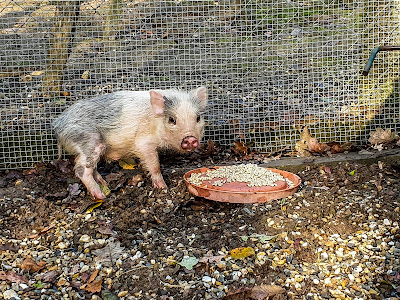 During my later bird feed rounds, I checked on our newcomer. He was lying on his bed out of the cold. He looked comfortable, although as I approached, he scarpered oinking with fear. Earning this animal’s trust was evidently going to take a long time. Feeling guilty at upsetting him, I quietly retreated. 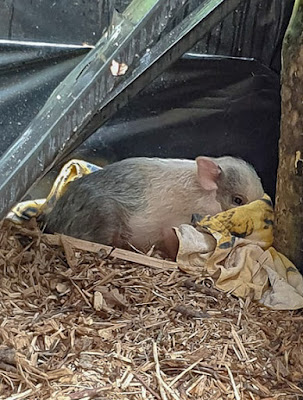 “What? Haven’t you given it a name yet? That’s not like you. How about Napoleon? He’ll probably end up with the right dimensions.”

“Oh no, I don’t think we can do that. I’m sure there’s an obscure French law or etiquette that says animals can’t be named Napoleon. It’s something about insulting the head of state.”

“Really? George Orwell missed that headline too, then. How about Nap? That’ll save dire embarrassment if someone hears you call his name. Mind you, since our nearest neighbour lives a kilometre away, the likelihood of that happening is extremely remote.”

I changed Nap’s water and gave him fresh food at the same time each day. Little by little, his terror was replaced by timidity. After about three days, I found him rooting for bugs in the soft soil. Thinking this was a good sign, it gave me a chance to have a proper look. 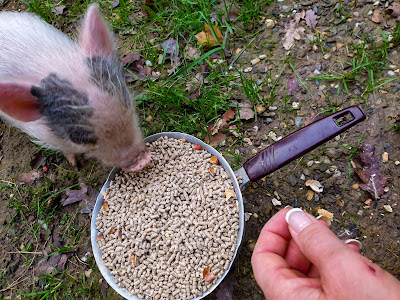 He was rapidly gaining weight which was great news. The bad news was that he had a nasty graze injury to one of his hind legs. While it looked clean, I took the precaution to ask our vet for advice. Rather than traumatising him yet again, we decided to leave it to nature. If it failed to heal, we would have to catch him up.

By the end of the first week, Nap was happy for me to potter around his pen, make his bed and sort out his food. His towel was damp from the humid conditions. It was much colder at night now, so I changed it for a fresh towel and a little fleece blanket. Curiously, I think that was the crucial first breakthrough. 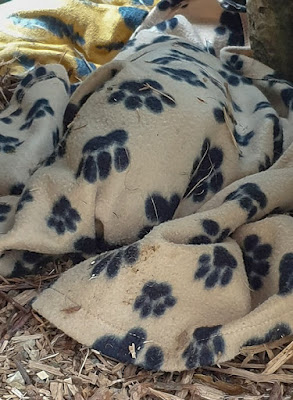 The next day I walked into what I thought was an empty cage. Concerned he might somehow have escaped, I checked every corner. Still nonplussed, I re-checked his bedding. The jumble of fleece blanket moved. I peered closer and listened. And then giggled.

Nap had buried between the towel and blanket and was fast asleep, snoring his head off. We were onto a winner.

Nap was an instant fan of fleece blankets. No matter how many times I washed it, he rejected the boring old towel stand-in and dashed onto the newly laundered blankie. The seedlings of trust were appearing. The next one came with food.

In the absence of bespoke pig meal, we had been feeding him pheasant nuts, a high protein food. Every now and again I’d add vegetable scraps and dried worms (treats for our birds), which he apparently loved.


A couple of days ago I walked in to find Nap had upturned his feeder and was wandering around his pen. He trotted up to me oinking hungrily. I had brought a few ground nuts (monkey nuts) for him to mix with his pellets. 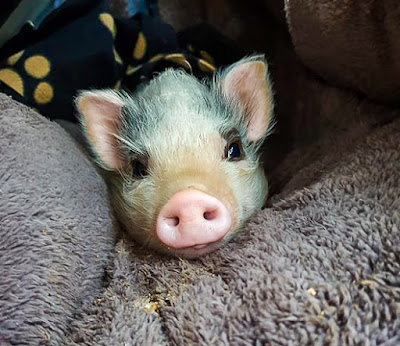 Nap watched me crack the shells, flinching when I made they make that funny crack sound. He cautiously approached when I dropped the nuts on the ground. One sniff and that was it. It’s just as well I had restricted the offering. Nap was a voracious nut-eater.

It had been another breakthrough, another trust barrier broken. We’ve only had our lad for three weeks. We have no idea where he came from. There seems little doubt that his previous owners chose to discard him. We have no idea why, and this time we’re not rushing to find out.

So now we have a pig in love with fleece blankets and hooked on shelled peanuts. Another animal to add to our collection of rescue critters. Oh, and he’s a smiler too. He’s coming along in oinks and squeals, and that injury is looking healthier every day. If no-one appears to make a claim, little Nap has a new home here, and we’ll always to do our best for him. 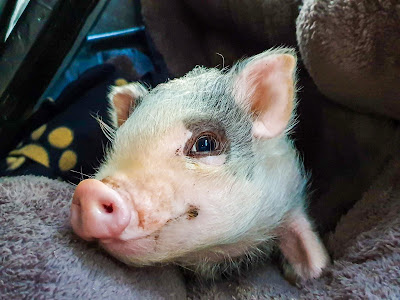 As for continuing writing Fat Dogs 5, well, Nap(oleon) won’t appear in that. I’m guessing his story will form part of a future chapter or two, though. D’you know, there really isn’t a dull moment in our rural French backwater.