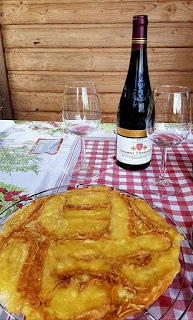 Have you ever been grabbed, I mean really grabbed, by a new culinary dish? Well, that’s what happened to me the first time I ate a piece of Flamiche au Maroilles. Cooked and served by our wonderful friend, Andrée, at a soirée, after my first nibble I was instantly hooked and started scoffing.

I kept my beady eyes shamefully fixed on the diminishing slab of golden gorgeousness as it circulated the assembled company, positively salivating by the time my Precious returned. Yes, I’d transformed into Smeagol. I made matters worse by feigning a polite offer of the remaining squares under the nose of the guest next door, before swishing it back before they could take one. With a furtive glance in both directions I stuffed the last morsels into my mouth. Gluttony personified, I know. Thankfully I hadn’t begun to cackle at the same time. 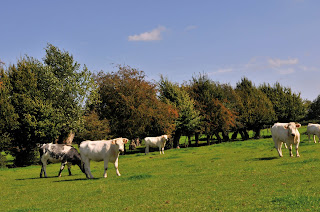 The following morning, still flushed by memories of this exquisite cheesy gem, I researched its antecedents online.  Maroilles cheese, the main ingredient, comes from the village of the same name, and takes all its flavours and distinction from the Avesnois and Thiérache areas in France, famed for their lush meadows and soft hedgerows, an ideal habitat for cattle. It is an unctuous, soft cheese with a washed rind and, in its early development, has a light covering of blue mould, which is later brushed off. It is left in a brick-ripening cellar for a number of weeks during which a red-orange rind evolves naturally.

As we all know, the French take their food deadly seriously, and cheese is no exception. I wagged my head with a touch of ridiculous pride when I noted that Maroilles has an AOC (Appellations d’origine contrôlée) sign of quality. The classification is laid out in the specifications drawn up by the AOC according to the Minister for Agriculture. It means it is a ‘protected designation of origin’ product, but that’s not all.

An AOC cheese guarantees quality, certain characteristics, a savoir-faire method of production, precedence and the recognition of the name which is so old that it cannot be patented. The objective for these signs of quality is to make them recognisable. AOC products first began with grading wines in Bordeaux in 1855 and now other extends to other foodstuffs. 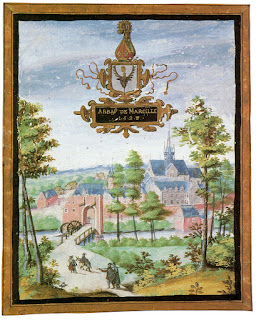 I read on and discovered that, according to one source, the earliest traces of the Maroilles cheese can be found in the 7th century. An old ordinance, ‘L’Ecrit des Pâturages’ (writing of pastures) told the inhabitants of the villages of Marbaix, Taisnières en Thiérache, Noyelles and Maroilles, to convert the milk of their cows into cheese on the day of Saint Jean Baptiste, 24th June, to give to the abbey of Maroille on the day of Saint Remy, around 100 days later. I dare say this might have been a hefty levy to pay in those days.

I had no idea whether or not my information was true, but it added a certain gravitas to the product that I felt was somehow fitting.

The next time I saw Andrée I badgered her to tell me how to make the dish. Completely overlooking the fact that I am, at best, a basic cook, she assured me that it was ‘très, très simple’ to make. She rattled off the ingredients in speed-French, and started giggling at me when she realised I’d barely got past base one, having got stuck on the word levure. After a couple more goes she gave in, which enabled me to hatch my cunning plan. Under some duress she agreed to go shopping with me, buy the mixings and give me a masterclass on how to cook the dish. Perfect! 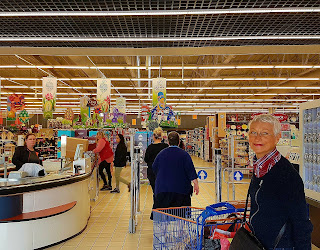 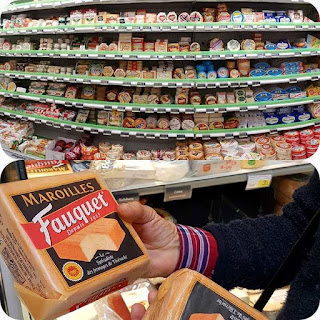 Our choice of store was E.Leclerc, a huge supermarket sure to have everything we needed. We headed to the cheese counter, which is always flummoxing. France being France, it’s simply not possible to be offered a choice of, say, four or even eight cheeses. There are literally banks of them. However, I triumphantly spotted a pack of Maroilles in double quick time only to be told in no uncertain terms that it was the wrong type. This didn’t make any sense to me at all, so we sought advice from a lovely cheese expert who was serving. She confirmed that Andrée was right, and I was being horribly dim/British. 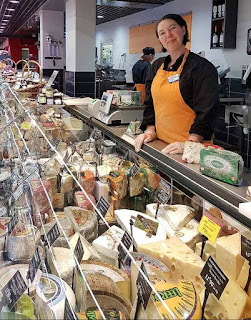 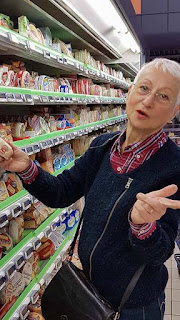 We located the correct variety in amongst yet another stack of fromages and as I was in the process of wheeling off with our chariot (the French word for a trolley – it’s one of my favourites), Andrée called me back. Pouf! Hadn’t I realised the recipe contained another cheese? Oops, nooo, sorry, another lost in translation moment. Back to the bank of goodies we went to search for Emmental, a cheese which is apparently extra melty when warmed.


This was followed by butter, had to be non-salty. That, I did understand. The type of flour, less so. I think Andrée was worried that with my floundering retail efforts we might not make it out by nightfall, so she cut to the quick and selected a specific bag of organic wheat flour. All done and it was off to find the final key ingredient, la levure. By now I’d workout what it was, of course, it was yeast. But it had to be living yeast, not the powdered stuff – the very thought of which cause a great explosion of ‘Pah!’ from my expert. With most of the kit in place we returned home, ready for the great demo. 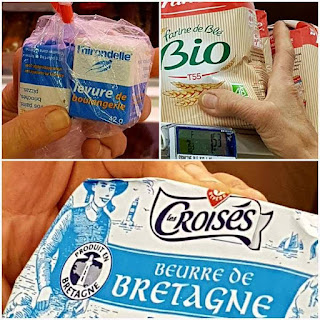 On the appointed day, Di, my sister, and I drove over to Andrée and Joël’s (her husband) home, laden with minor ingredients and major dogs. Our plan was to let the animals potter around in their garden while we watched our expert prepare the Flamiche au Maroilles. Then, while it was cooking, we’d go for a short walk. It was a great idea but one, as we would soon discover, that was fatally flawed. 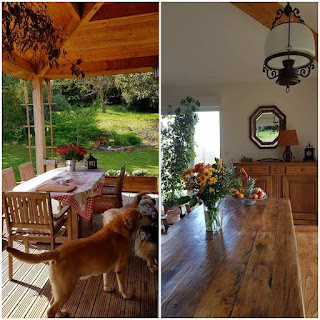 When we arrived we took a moment to coo at her lovely home. With specimen trees at the front and a long garden that backs onto endless views, it is a fabulous setting. We had already decided that I would be team photo-taker and Di, sous-chef.  Business-like as usual, Andrée quickly shooed us into position and got cracking.

Despite howling like banshees all the way there, the grotty mutts sniffed the air with instant anticipation and steadfastly refused to go and amuse themselves. Instead they hung around like a bunch of hairy reprobates. I doubt that Michel Roux Jr would have tolerated such assistants, but Andrée took it all in her stride.

We quickly reviewed the recipe, method and got to work. Andrée had decided to make four flamiche so quantities were adjusted accordingly. The first job was to add yeast to sugary milk, this was put to one side and Sprite, extra small dog, was put on guard duty while it worked its magic in the sun. 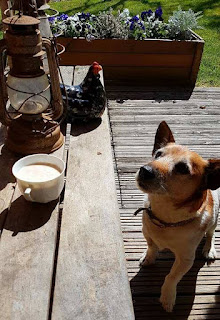 The next stage was expertly described by our host, who was fast becoming a pro at this celebrity chef lark. Flour, salt and butter were produced, the latter of which caused a moment of tension, which threatened to ruin the proceedings. The butter was declared too solid. Zut! 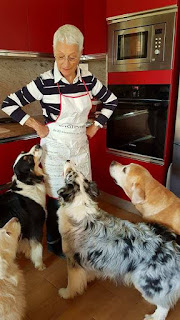 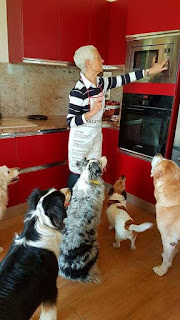 “Pas de problème,” exclaimed Andrée, who had a solution. Off she went to the microwave oven with all canine sous chefs in tow, save trusty Sprite, who was still on yeast guard duty – for a bit. It seems that the agony of new smells wafting out of the kitchen was all too much. Moments later in trotted minor Jack Russell to join the crew. Andrée gave them a short lecture on table manners which didn’t seem to be overly successful, so they were all despatched outside again.

Our chickens had made a contribution to the day’s proceedings by donating their eggs. One of Di’s jobs was to use a single, complete egg, then separate the yolks from the others. Sadly this instruction became slightly lost in translation. Luckily our girls are prolific layers so there was no problem. One re-load later and we were nicely back on track. Meanwhile, all sorts of interesting things were happening to the yeast. It was becoming very lively indeed. Di and I felt it was presenting an overflow risk, but Andrée was distinctly underwhelmed so we left it to swell untamed. 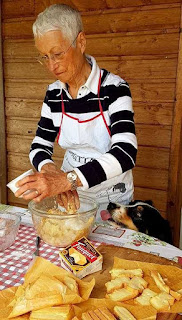 Under careful canine supervision, the famous Maroilles cheese was cut up, and our chef began mixing the mixture. Her mother had adopted a particular technique, she said, and it was one she swore by. As we struggled to grapple with some of the more complicated French explanations, Baltik padded over to help Andrée with dispensing the yeast. It’s at times like this when one is glad of high table tops. 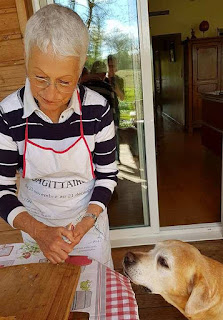 Kneaded to perfection, Andrée and Aby, a canine stickler for precision, measured out the portions and began spreading them on each base. Di helped with one, and ably demonstrated how expert our host is at this tricky procedure. There’s definitely a knack to this sort of thing. Rescued once again, we now had four mixtures set aside while the yeast continued to do its work. 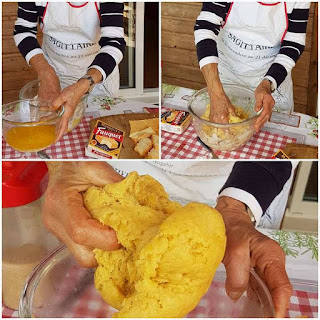 A short dog walk came next, one which took us along a route that was sandwiched between apple and plum orchards and rows of noble vines. It was a glorious interlude. Unusually, however, the dogs were keen to return home. 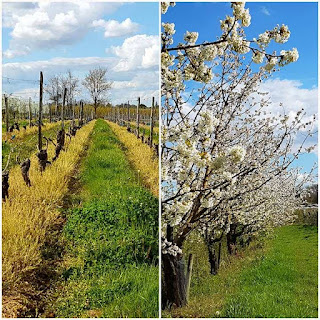 After a worryingly close examination, Max confirmed that the Flamiche bases had risen sufficiently. They were whisked from under his nose and Banjo, elder statesdog, oversaw the application of cheeses. A light sprinkling of melty cheese formed the precursor to the ceremonial laying of Maroilles lovelies. I banished all thoughts of rocketing cholesterol levels as Smeagol crept back into my soul. My Precious was nearing completion. 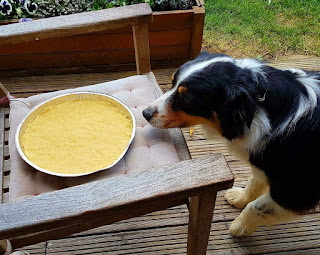 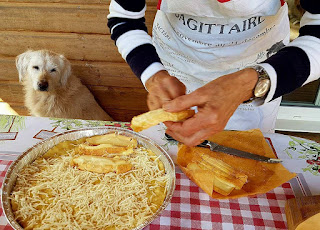 Into the oven it went for 20 minutes. Every now and again the bubble-up factor was examined and compared with the transforming colour of the cheese. Timing seemed to be critical here. Too bubbly, too brown and the dish would be ruined. Finally, our chef adjudged the dish to be ‘prêt’ – it was ready. 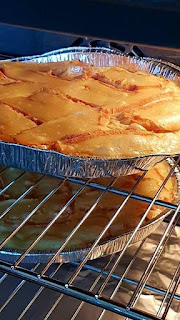 Cheesy edges were eased from the foil case sides and returned to the preparation table. The assembled company, both human and canine, looked on, positively salivating at the results. Andrée scrutinised her creations in the fading sun of the afternoon and pronounced herself satisfied. ‘Et voilà,’ our dish was ready to sample. 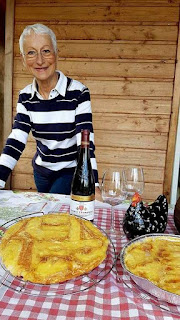 With her usual chic charm and modesty, Andrée emphasised that it was the simplest recipe in the world to make. Best eaten warm, it is a dish that works well with fresh salad, served in small pieces alongside an aperitif, or if you fancy a slab of unadulterated cheesy heaven – just on its own. The base also lends itself to vegetable and even fruit toppings, the potential seemed limitless.

With our canine chefs fielding stray cheesy flakes, we tucked into our portions, savouring every mouthful. It was just as indulgently luscious as the first time I’d tasted it.

Our masterclass was over, every second had been great fun, educational and always a great pleasure in the company of our wonderful friend – I’m truly grateful to Andrée for giving us so much of her time.

Here is a rough translation of the recipe below, if you’re a cheese lover and fancy a calorie-busting treat, I guarantee you’ll love this French fantasy. 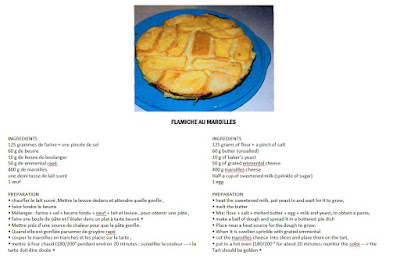