In defence of the gentlemen concerned, before you begin rolling your eyes in despair at this account, it’s only fair to assure you that they are all expert off-road drivers. No really, they are…

So far we’ve had a funny old year weather-wise. As many of you know, the heavens opened in our pocket of south-west France in mid-December and forgot to stop. Flash floods, deluges, mud slides, we had the lot.

Crops were threatened, giving farmers reason to moan more than usual, which put the wind up insurance companies. They retaliated by reaching for their small print disclaimers stating: sorry, no payout for Acts of God. This fuelled Jack’s (my grumpy husband) conviction that there exists an even tinier print which reads: we find a way not to pay whatever the circumstances. 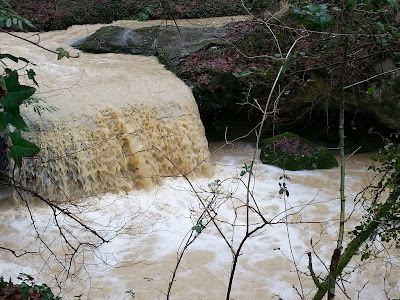 By the second week in June we were understandably a bit cheesed off with constantly wading through our clay-based mud. Take a bucket of that lot home and I’m sure I could have knocked up a couple of decent kiln-ready pots in no time at all.

Happily there were one or two respite days. The sun shone down, sizzling sodden crops, reminding us that it really does get pretty hot here at this time of year. It was on one such day we decided to spend the evening nature watching.

With Jack at the wheel of our aging 4x4, we shimmied and skidded into the forest to my favourite observation hide. He temporarily left me to unpack our picnic and drove on to complete his deer food dispensing rounds.

I watched as the car slewed from side to side, taking its own route through deeply bevelled, muddy tracks. As it disappeared from view, sideways, I heaved a sigh of relief that it wasn’t me driving. There’s no doubt Jack really does know how to handle these conditions, I’d have had us in a ditch in no time at all.

With the final feed done, Jack was on his way back via another innocuous-looking trail. I glanced over and was surprised to see he had stopped on open ground. This was strange. I quickly realised why. Mud spats, glistening in the evening sun, were flying up either side of the car. The tyres were spinning on the level surface – but there was no forward movement at all. 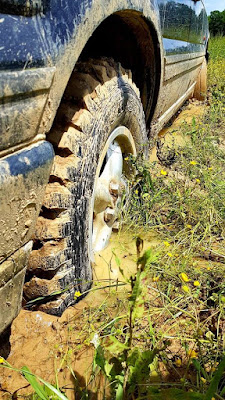 I peered through binoculars, secretly grateful I wasn’t there to hear Jack’s commentary. (To say my husband is easily frustrated would be a mild understatement. Okay – gross understatement.) It took him about ten minutes, working the gears, before he finally managed to get the car moving.

Jack reversed back to the deer feeding point and took a new route via the meadow edge. This seemed sensible. The undergrowth is high and should have had root systems to provide firmer going. Not so. The car ploughed ahead a short distance and stopped again. This wasn’t a good sign.

With growing tension I watched Jack amongst the weeds battling the conditions, but the car wasn’t going anywhere. There wasn’t much point in me spending the evening gawping through my binoculars so I climbed out of the hide and walked the short distance to join him.

Sticky stuff, clay-based soil. The more Jack tried to free it, the more the car glued itself to the mud. To add insult to injured pride, a roving mushroom picker popped out of the woods.

Gilles, a neighbouring farmer, when not moaning about failed crops is ever so chirpy. He kindly offered to fetch his tractor to tow us out. Nooooo, that was far too simple. Jack, puffing out his chest, thanked him and refused. He’d had an alternative idea. We complimented Gilles on his magnificent fungi and he disappeared back into the woods to find his lost wife.

Jack’s masterful scheme was to use the Jobber’s (mini truck) winch to pull it out. But the Jobber was back at the house – a long way away.

Sometime later, as night was chasing in, we were organised. The Jobber winch hook was snugly wrapped around a tree and tow rope attached to the car. Point of information here: Range Rovers are very heavy vehicles. 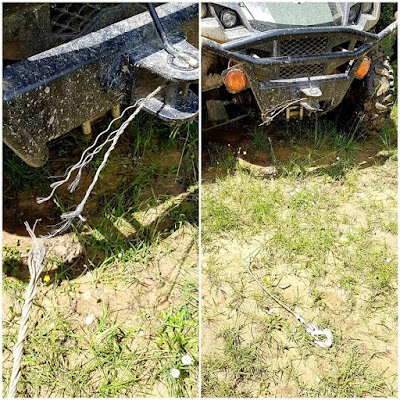 As the tow rope and winch cable took up the strain it was clear something had to give. It wasn’t the Range Rover, or the tree. A rifle crack twang signified the end of the cable as the hawser snapped. This was an awkward moment. I looked nervously at Jack, assuming he was ready to blow.

“H’m, thought that might happen,” he mused, sounding remarkably balanced under the circumstances.

With nothing else to try, we abandoned the car to the forces of nature overnight.

The following day brought Nathan, our French forester and all round treasure. We explained the situation.

“Pas de problème,” he quietly murmured. Nathan was practically born on his tractor, has spent years wielding it around the forest pathways and was supremely confident it would drag the car out in no time at all.

That afternoon we traipsed back into the forest. Jack and I in the Jobber, our dogs, Aby and Max, galloping joyfully alongside. Nathan trundled along behind in his prehistoric tractor.

We weren’t overly surprised to find that the car was a little lower in the ground, but at least it hadn’t been mauled by a wild boar. The men surveyed the site – evidently deciding it was going to be a cinch. 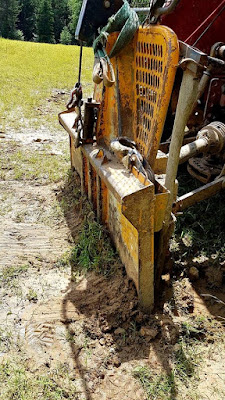 Nathan attached a long towing line to the car and planted his forester’s winch blade deeply into the ground as an extra brake. Jack fired up the Range Rover and the rescue attempt began. Mud flew, engines roared and tempers flared, but no progress was made. Instead, the car was now tilting backwards where the rear tyres had sunk even deeper into the mud. 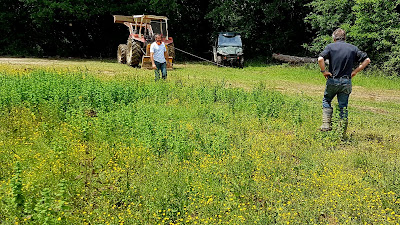 Temporarily foiled, but never defeated, we eyeballed the damage. Max tested out nearby ruts to confirm that they were deep – no need, Max, we knew they were. Soon a new plan of attack was hatched, it was a simple case of physics. To avoid dragging the car deeper into the mud the tractor had to pull the vehicle upwards. Easy-peasy, Nathan had a lovely big chain that would yank it out in moments. 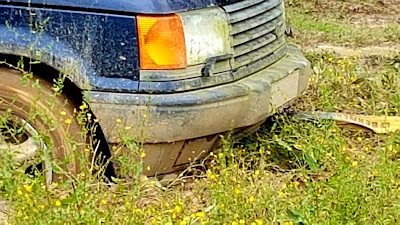 The dogs were dismissed to the Jobber tailgate for bad behaviour. I joined them and we watched as the tractor took up its new position. More engine screams, ash clouds of mud filled the air, as did expletives while both vehicles laboured under the strain. All too soon it became clear what was going to happen. Nothing positive.

Engines were cut.  Nathan got out of his cab, and Jack climbed out of the window as the door rim was below the ground now.

“Merde!” (bit sweary), Nathan exclaimed, morosely surveying his sunken charger. The tractor had joined the fate of the Range Rover and was well and truly stuck. Now we were in a pickle. We had nothing else that could attempt a tow and were fast running out of vehicles. 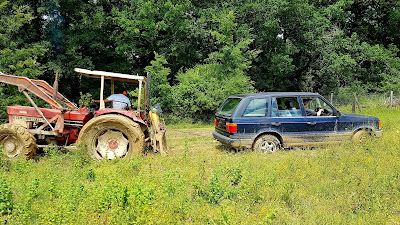 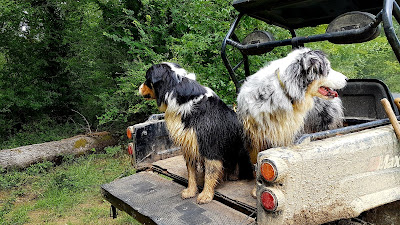 To avoid exposing any macho embarrassment, I stared at my toes while the dogs looked away, busying themselves with rabbit spotting. Resigned to the inevitable, the men concluded the only way forward was to dig out the vehicles. Brilliant. They went to fetch excavation tools while the dogs and I tested the site for further wet spots. There were lots.

This time Nathan returned on a quad bike. I’m still not sure why. All we needed was the tractor mower and we’d have the complete mechanical portfolio out. We spent the next half hour splashing around with spades, pieces of wood, branches, anything to enable the tractor tyres to gain purchase. Those babies weren’t having any of it. 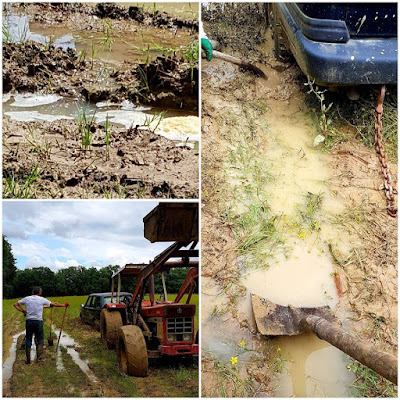 Wheels with no visible tread spun gaily in the mud. Meanwhile, the Range Rover was gently sinking. 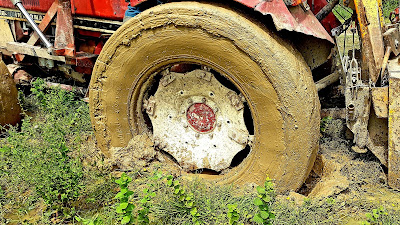 It may have been a touch emasculating, but there we are. We were well and truly scuppered. The guttingly awful truth had to be faced. We needed Gilles after all.

“Ah oui bien sûr,” he cried, thrilled to be invited to save the day. He was shopping but he and his tractor would be with us within the hour. 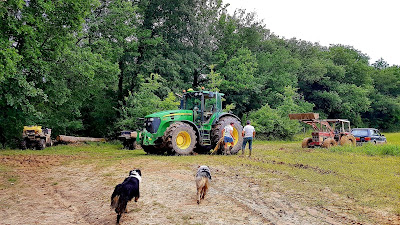 We reassembled to the sounds of distant rumbling. Out into the clearing came Gilles in his tractor. It was positively enormous. Pulling up into the carpark of assorted vehicles and dogs, he threw open the cab door and zoomed down the ladder. Wearing his customary ’70’s shorts and wellies, I couldn’t help wondering whether he had stopped off to change en route from shopping. Probably not.

Absolute gent that he is, Gilles condoled about the general merde-ness of the conditions, it could have happened to anyone. We all sagely nodded in agreement. He continued by assuring us he’d have our vehicles on terra firma in no time at all. And he did. 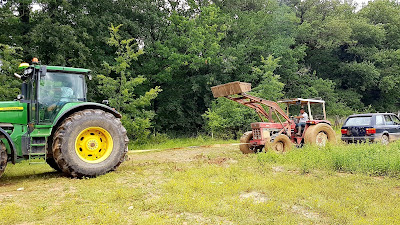 New lengths of tow rope were attached to Nathan’s tractor, which now looked like a Dinky toy. Gilles gently eased the gears of his magnificent monster and plucked it out of the ground to safety. Now it was the Range Rover’s turn. This wasn’t quite so simple as it was semi-submerged, or at least well and truly planted. 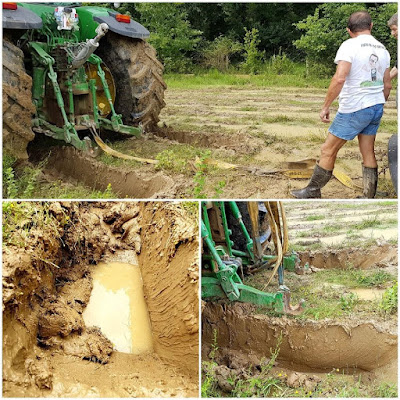 My girlie concerns that the chassis might become detached from the rest of the vehicle with one good yank were dismissed as a new angle of attack was established. Gilles’ mighty machine scored another blinder by gently easing the car out of its mud bath and pulling it onto the hard stuff. What a relief. 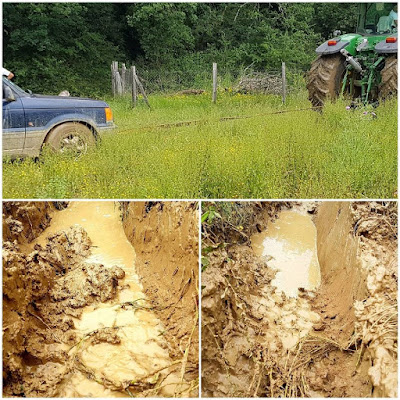 Finally we had all our two vehicles operational and it was all thanks to Gilles in those dashing ’70’s shorts. Who would have thought an innocent open forest track could be the cause of so much hassle. That’s inglorious mud for you! 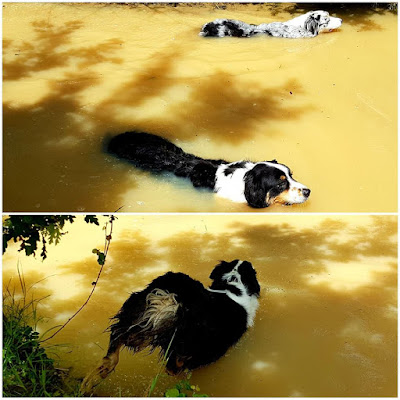