Message in a Bottle? 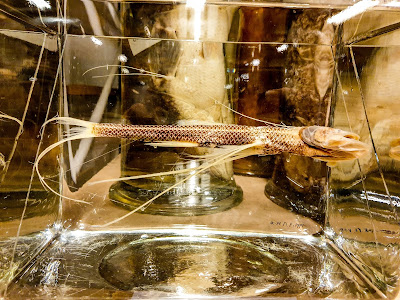 Have you ever been so excited about something you can barely sleep? I have, and this is why. 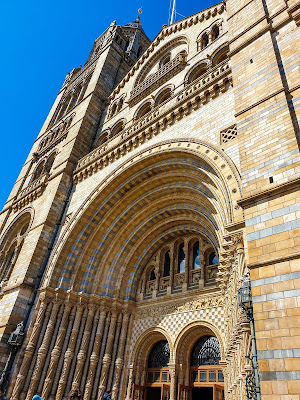 We were at the Natural History Museum in London. For animal and plant lovers, it’s a building bulging with grippingly interesting exhibits from around the world. Thousands of treasures can be enjoyed by the public here, but for special reasons, many others lie in state behind closed doors. It’s a magical place for someone like me.

As a new member of the Museum, I had booked myself and my animal-loving pal, Lisa, on a behind the scenes tour. And we were keen as mustard.

Breathlessly, we waited by a significant piece of coral in Hintze Hall, the cathedral-like gateway to the Museum. At the appointed hour, Jim (whose name I have changed out of courtesy), appeared, complete with clipboard and badge. You know you’re in for a treat when the chap in charge is as eager as you, and he’s seen the sights a hundred times. 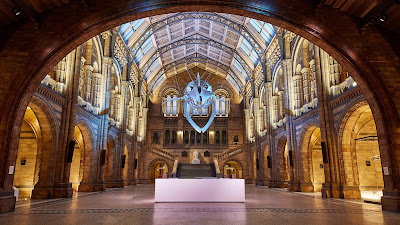 His introductions were brief, no time for in-depth explanations about the magnificent collection of polyps to our left. Jim was dying to get on with the show. We were about to do something special, he beamed. Very, very special. I love people like Jim.

Dodging hordes of school children, Jim led us along a passage, pointing at interesting things along the way. Pillars with remarkable carvings here, insect exhibits there and don’t forget the dinosaur display in the hall on the left.

“Not now!” groaned Lisa. She knows about my undying love for fossils and bones.

Down into the Darwin Centre we went, barely able to keep up with our loping guide. Through a secret door and into a lift which whipped us away from the public eye. This was when our group of six began to feel ever so special.

“Can you smell that?” he asked.

Since it was the kind of smell that could sizzle a tonsil, it was hard to ignore. We nodded with squished-up noses. One game lady, whose eyes had begun to water profusely, suggested a particular type of chemical before retiring behind her hankie. Jim nodded. She was on the right track.

Jim opened a door into one of the rooms. It revealed a study-like setting and dissecting table. In places like this, he said, scientists came from all over the world to examine samples. New learning is acquired, discoveries are made, some which become world-famous. My mind boggled at the thought of the thrilling finds scrutinised here.

Back in the corridor, he pointed to a darkened room, one with several small bugs wandering around the inner sill.

“And what do you think these might be?” he asked.

As keeper of maggots in our fridge, I had half an idea. I should explain... Maggots are a great source of protein for the pheasant chicks we’re currently rearing. They get a daily portion. Are they yucky? Oh yes, but they have to be stored in pots somewhere cold to stop them wriggling out and going on a march. Thanks to our local supplier, I knew how they were harvested. I made a suggestion.

“Are they a type of flesh-eating bug?”

It was a bingo! moment. Nodding enthusiastically, Jim explained that body parts were brought here and left to a battalion of special flesh-eating beetles. It was nature’s way of getting down to the bare bones as t’were, and they did a grand job. We were lucky to see them. Apparently. A new and exciting piece of animal had obviously been brought in and the critters were hard at work.

Gripped by the possibility of having passed a half-gnawed zoological scientific breakthrough, we continued. Through heavy security doors, in another lift, and we had reached the purpose of our tour. We stored our bags but were allowed to keep phones for photos. Jim, looking radiantly expectant, gestured around a corner.

“Welcome to the Spirit Collection,” he smiled.

And there it was. Jars and jars of preservative containing extremely dead creatures. As the name suggests, it’s pretty much alcohol, but you wouldn’t take a sip. Reason one, it’s about 70% ethanol, the current occupants of each container being the second.

We goggled at the shelves stacked with glass jars. There were endless rows of them, it was almost impossible to take in. Jim smiled at our wonder, encouraging us to take photos. We did. 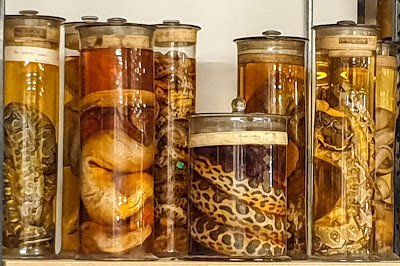 But we were only scratching the surface. We peered, awestruck, at tiny wormy things, then bigger, weirder ones. Snakes, ooh lots of snakes.

Jim explained that each category has a floor. A floor? The Darwin Centre is a great big place. Try wrapping your brains around that one.

Every jar was labelled, some with exquisite copperplate handwriting, others typed. Each dated. Shoulder to shoulder they stood, some ages old, others bottled only the other day. I was enthralled.

Jim gently shunted us on. We followed, gabbling about exhibits as we went. And just as I felt I was getting on top of the enormity of what we were seeing, he stunned us with another fact. 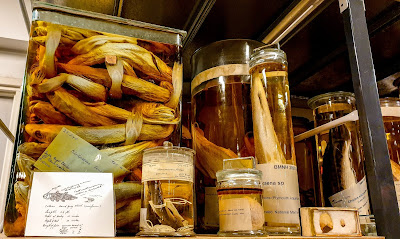 “There’s a lot more to see you know. We have over 21 million animal specimens stored in alcohol in the Museum’s Spirit Collection, but unfortunately, we only have time to see a few.”

You could have knocked my socks off.

En route to another level, we passed a hospital theatre-type room with chains and winches. Apparently a different type of examination room, it was where a female grey seal, found dead on the beach in Kent last year, was dissected. I recalled the story from the news at the time. It had become famous as the key purpose was for scientists to search for plastics. I looked around this stark, functional space feeling somehow honoured to be in a place where so much zoological research went on.

“And now, for my favourite room. This one has a real wow-factor,” said Jim.

By now I was just about wowed out. Could anything beat what we’d just seen? 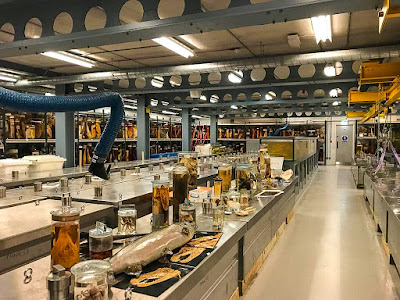 We were led into the Tank Room, which was huge. Here big, extra unusual and bizarre things were kept: fish, non-fish and even furry animals – which were a bit weird. 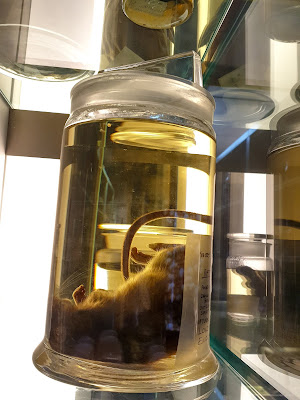 Jim told us this room had been the setting for a famous movie. Unfortunately, I hadn’t heard of it, but it did remind me of a kitchen scene in the film Jurassic Park. And at that stage of the proceedings, quite frankly, I wouldn’t have been at all surprised if a Velociraptor had sprung out from behind one of those whopping great tanks.

Show-stopping critters occupied this area. One side contained ocean dwellers with huge bass in jars my height, tuna, peculiar eels, creepy angler fish and oodles more. As we scanned the room, Jim pointed out a coelacanth, the most famous living fossil. 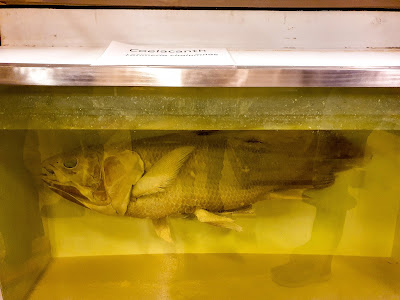 “Thank goodness for that,” muttered Lisa, “this one might be dead, but at least you’ve seen a fossil today.”

We turned to look at a selection of much smaller, exquisite-looking deep-sea fish. Pretty deadly they were, each utterly remarkable. 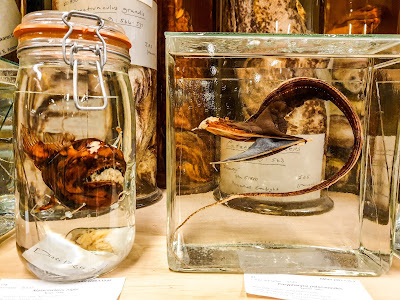 “And here’s my personal favourite, she’s called Archie,” smiled Jim as he pointed to the centre of the room. Looking head-on, at first it was difficult to work out what Archie was. Then it clicked. It was a ginormous squid in a purpose-made oblong tank. The creature had been accidentally caught by a trawler off the coast of the Falkland Islands at a depth of 220 metres. It was donated, eventually transported to the Museum, and identified as Architeuthis dux, a giant squid. And, oh my, was she a whopper! 8.62 metres, that’s 28 and a bit, feet, long. 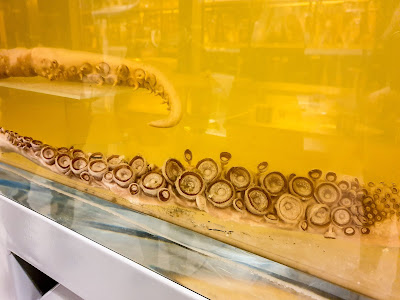 We gawped at this monster with dinner plate eyes and mean-looking tentacles. Once those suckers had latched on, I suspect there would be little chance of escape. We clicked away, taking photo after photo of this remarkable animal.

It wasn’t until we'd reached Archie's toes that we realised she wasn’t alone. There were the remains of half a baby Colossal squid, a creature even rarer than Archie. What an incredible treat this was.

At the end of the tank room, we were directed to a glass case. It housed several samples accumulated by Charles Darwin during his voyage on the Beagle to the Cape Verde Islands between 1831-1836. 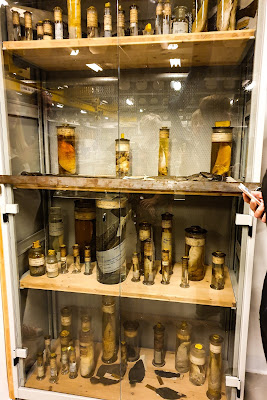 For me, viewing original discoveries is mesmerising, and this was no different. I tried to imagine what it must have been like for Darwin during his travels. Hard-going, dangerous, exhilarating? All of those, I expect. 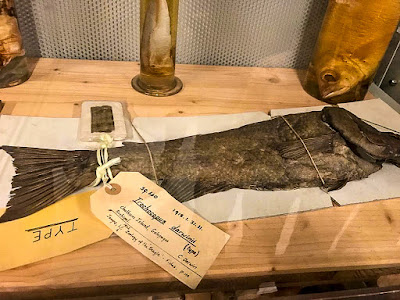 As we absorbed their zoological importance, Jim explained why the Darwin jars have yellow lids. These are termed type specimens and are those specimens on which the descriptions and name of a new species are based. It’s hard to say which I was most impressed by, they were all extraordinary. 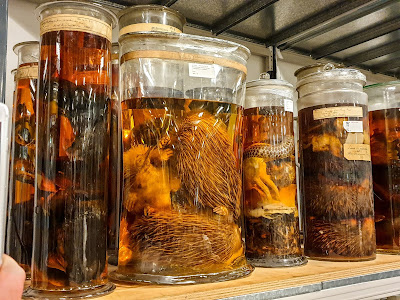 Reluctantly we dragged ourselves away to be faced by furred animals. But in jars? They seemed too surreal to be real. But they were. Bats, rats, porcupines, monkeys, and many more. Some were a bit eeewww, others looked hot out of a Dracula movie, but each was amazing in its own way. 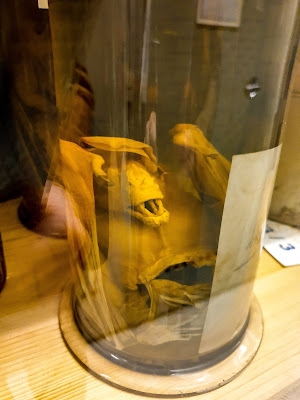 And then there were the tanks.

It turns out that some animals are just too big to squash in a jar. These are the ones stored in the methylated spirits tanks. Sadly, we were unable to view them, but the contents include a bluefin tuna, shark, monkfish and a mountain gorilla. No wonder they had winch equipment. 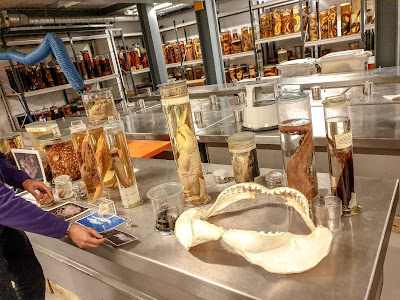 Our tour was nearly over. It had seemed like seconds, but it was closer to an hour. We left the Tank Room, passing a shark jaw with rows and rows of teeth intact. Now, here was an animal who never suffered dental issues. We passed a magnificent Komodo dragon, other sharks heads and reptiles with exotic markings. There was far too much to take in, but we had enjoyed a brilliant glimpse of a completely different world.

As we returned to our start point, someone asked why more of the Spirit Collection wasn’t on public display. The answer was simple. They needed to be kept in a specially controlled environment where their preservatives could be properly maintained. 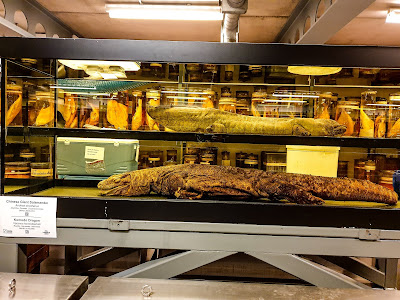 As he wound up our tour, Jim said there were over 80 million specimens in the Museum and the Spirit Collection was essentially a library for scientific researchers to further their learning about how life has evolved, identify new species and use the information for further scientific study. No wonder he loved conducting his tours. 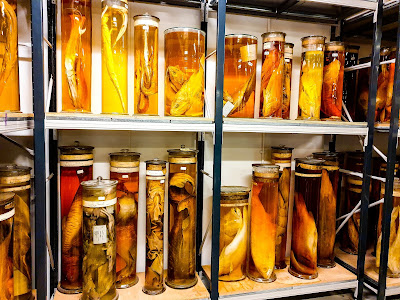 “And do you have any idea how many shelves there are in the collection?” I asked, still trying to absorb it all.

“We have 27 kilometres of them here,” he replied, “all loaded with specimens, each telling its own story.” 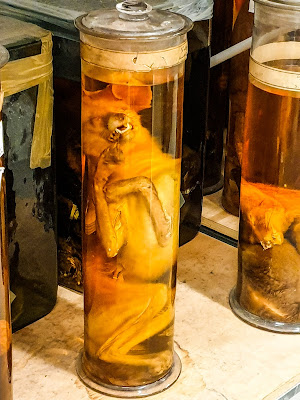 A message in a bottle? Absolutely. What a fantastic preview we’d had of another world, and I have no doubt it was further enriched by Jim's uplifting guidance. We'll definitely take the tour again one day and hope Jim will be there to inspire us. 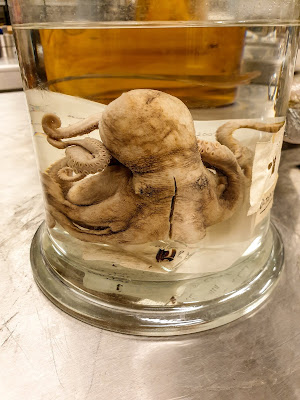