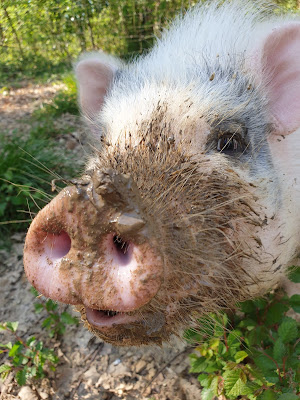 Nap is our much-loved Vietnamese Pot-bellied pig. Jack, my husband, and I rescued him in 2019 after we found him abandoned in our forest. A skinny, tiny piglet with superficial injuries, the poor mite wouldn’t have lasted long by himself. We caught him up and welcomed him into the family. 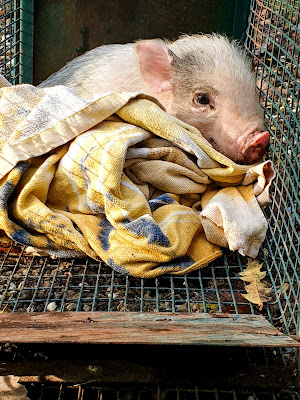 Since that nightmarish start to his life, Nap has grown upwards and outwards. He lives in an area with a spinny, grazing, and around thirty grapevines. Well, that’s how it was. Nap, our first pig, has taught us a great deal. 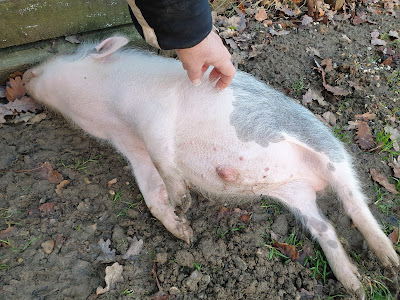 We knew that pigs ‘rootled’ for grubs and other earthy delicacies with their snouts. But we hadn’t realised that they are the porcine version of bulldozers. ‘Destroyers’ might be a more appropriate word.

Nap has systematically dug up an acre of grassland, felled a couple of saplings and played snoutball with the trunks. He has eaten most of my beloved grapevines and chewed the fencing. 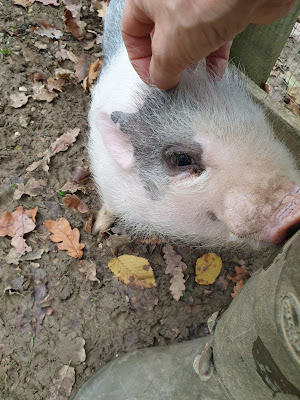 Happily, there is an upside to pigly characteristics. It has been a revelation to discover how affectionate and intelligent they are. When Nap decided I wasn’t going to harm him, he started devotedly followed me, wanting lots of love. He’s the same today. 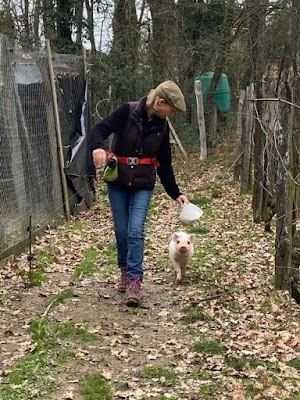 Nap trots up to the gate when I approach, joyfully squealing and grunting, ready to deliver a sloppy kiss to my boot or leg. He often brings a stick to play and will lumber around in ungainly circles before leading me to the feed bin.

Once Nap has inhaled his meal (pigs don’t seem to have a ‘stop’ mechanism where it comes to grub), it’s cuddle time. The earth shudders as he slowly keels over, as it would since he now weighs over 100 kg (220 pounds). Nap closes his eyes and squeaks with pleasure as I indulge him with a back scratch and tummy rub. 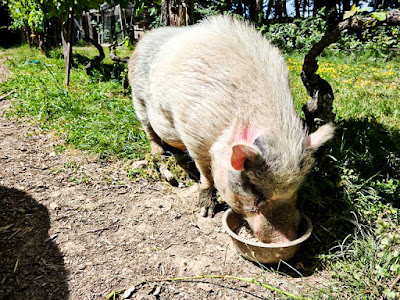 Nap’s other great joy in life is wallowing in mud. And with the help of his excavation skills, one corner of the enclosure is now a dedicated bog.

Life with our amiable boy has settled into a comfortable routine. We sigh at the sight of our ruined vines, the grass that will never be the same again and a broken fence. Our reward is a loving, playful gallump, or at least he was.

Last week during my usual animal husbandry rounds, I strolled over to Nap’s pen, expecting his usual welcome. Weirdly, there was no sign of him. I immediately panicked, concerned that the fence had finally given way and he had pottered off into the forest. He hadn’t.

Nap was lying on the ground. Something was wrong. As I got closer, he grunted pitifully, clearly in pain. Wincing, he managed to stand but was wobbly. He ate most of his supper, which I assumed was a good sign, and then tottered off to bed. 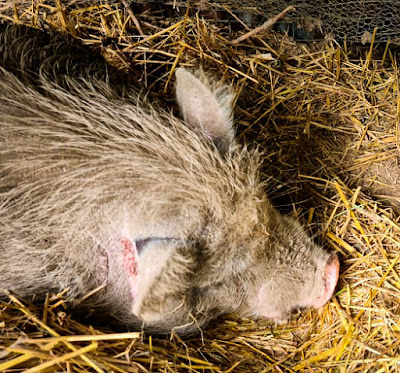 The following morning I checked on him, hoping he would be brighter. He wasn’t. He was worse. Nap’s behaviour was worryingly out of character. He was listless, limping badly and continually lay down as though his hooves were sore. There was nothing for it. I had to call in a farm animal vet, a French first for us.

As good as his word, Docteur Bayeur appeared a couple of hours later. A no-nonsense type, the crane fly-like man was deeply unimpressed by the rapturous ‘bonjour!’ he received from our Australian Shepherd, Aby. He was even less impressed by the welcome Wellington boot Max, our other Aussie, proffered as a special gift.

After banishing the dogs to the house, Jack and I took Docteur Bayeur down to the compound. En route, I anxiously briefed him on Nap’s symptoms, pointing towards the mound of animal lying on the ground.

“Aha, you see, Docteur? I said. “Normally, he would be up by now and trotting over to see us.”

Jack, who only interacts with Nap when he brings food sacks down, was looking sceptical.

“No, this is different. He has acute hearing and always jumps up when I arrive with the dogs.” 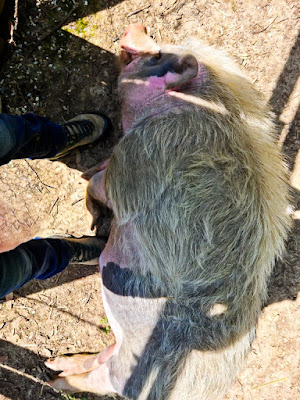 The men watched while I walked over to Nap. I was convinced our boy was at death’s door. With a pathetic squeak, he opened an eye, half stretched a leg and groaned. And then he saw the men.

Docteur Bayeur, wearing an All Creatures Great and Small khaki lab coat, unfurled an enormous stethoscope as he came over to join me. This caused a dramatic reaction.

Nap scrambled up, turned to face the vet and lowered his head.

“You say he has a good temperament?”

“Oh, yes, he’s very soft and gentle, Docteur, no problem at all. And look, he’s unsteady. I’m sure at least one of his hooves is sore.”

Nodding, Docteur Bayeur reached out to touch his patient, which had an even more unexpected effect. Nap snorted and shot off like a racehorse. We watched as our vet spent the next ten minutes pacing up and down in pursuit of a galloping pig. Jack made the blindingly obvious observation.

“Honestly, he is. He’s just frightened. He could barely move this morning.”

“That bloke would frighten me with his morgue coat on. And the head of that stethoscope is the size of a dinner plate. Oh Lord, we’re going to be here all afternoon at this rate.”

“Be patient, Jack! I’m sure this is what usually happens with pigs. Possibly, anyway.”

As Nap zoomed past again, Docteur Bayeur, puffing a little, rejoined us.

“I am very sorry about this, Docteur. Perhaps he was maltreated by a man. Um, is there a special trapping technique used for pigs?”

“Yes, that is likely. Pigs are notoriously difficult to catch. Generally, a crush cage is used. The animal is driven in so they can be examined.”

“Ah, I’m afraid we don’t have anything like that. At least it’s given you a chance to see how badly he is limping.”

“How about if I help by giving him some food? I’m sure that’ll calm him down.”

I filled the bowl and walked up to Nap, who was sulking in a corner. As predicted, he got stuck into his food while I chirruped sweet nothings into his ear. Meanwhile, Docteur Bayeur commenced a stealthy side-on approach. He got as far as touching Nap’s back, and that was that. Our invalid thundered off again.

“Is he? I thought they were supposed to have a big belly.”

“Yes, but he has a roll of fat on his back. What food are you giving him?”

He grunted when I explained.

“This is used for fattening up pigs for slaughter, for eating.”

“I’ll reduce his food straight away, Docteur, thank you.” 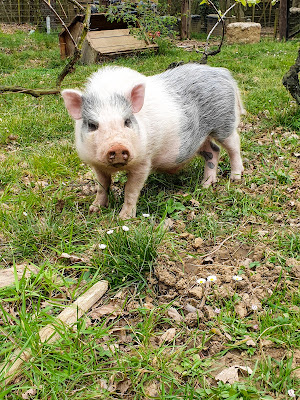 Our vet gamely resumed his pursuit with my impatient husband Jack becoming ever more bored. Sadly, matters took a turn for the worse. Nap performed a remarkably agile pirouette in front of Docteur Bayeur and started pawing the ground. Our vet frowned.

“I’m starting to wonder about this bloke. If he doesn’t recognise what those whoppers are, he’d be better off looking after rabbits,” he mumbled.

“Probably. There are problems with anaesthetic and adult pigs. How old is Naf Naf?”

It didn’t seem to be the time to correct his mistake, especially since I risked insulting the entire French nation by using his full name: Napoleon. I explained that he was coming up to two years old.

“You know, males can alter as they mature.”

“Perhaps, but luckily for us, Nap has always had an adorable, placid character.”

At which point, Nap turned to face his pursuer, stamped a hoof and let out a pigly roar.

“Not today, madame. You see his tusks?”

“Yes, they have grown considerably recently.”

“When they are angry, they charge and can inflict serious injury.”

And this was when we reached our lowest point. Nap took a couple of paces towards Docteur Bayeur, stopped and had a big wee followed by a giant poo. And then, to my profound embarrassment, he commenced an unmistakably male act right in front of us, to an inevitable messy conclusion.

“This is a typical display of male behaviour. It is common with pigs.”

“Oh, is it?” I said, trying to sound scientifically intrigued.

“I wondered why most of the fence posts were leaning at an acute angle,” Jack mused.

“Huh. I’ll wear gloves when I make the repairs.”

Having wasted an hour, we gave up and left our disgraceful boy having a triumphant wallow in the mud. I was mortified. 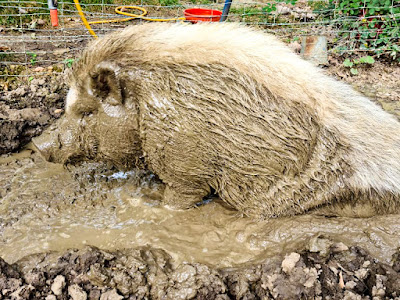 As we were leaving, we heard a familiar snort from the forest fringe. Tripod, our three-legged wild boar, had sauntered up looking for snacks. I don’t think Docteur Bayeur had seen an animal like him before. His veterinary interest was piqued. 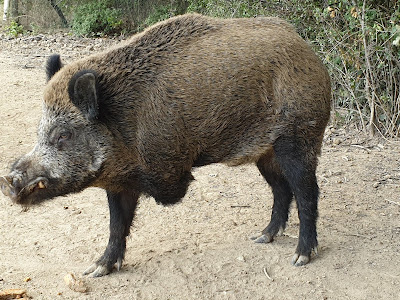 We regaled him with Tripod’s life history as we hand fed our (not so) wild boar.

“I see. This boar would have died without your aid. Interesting, you anglais save animals with leg problems.”

I decided not to talk him through our list of able-bodied rescued family members.

Before leaving, Docteur Bayeur, who had not been able to examine his patient, prescribed painkillers and a course of generic antibiotics. As soon as he had gone, I rushed back down to the pen, and what did I find?

Nap, our very naughty pig, was lying on the ground, groaning like a tragic drama queen. He got up and staggered slowly over to his feed bowl, nudging my leg lovingly and ever so gently pushing his bowl in the direction of the feed bin.

As a postscript to this sorry episode, I can report a happy ending. Nap has made a full recovery. He is on a diet, but it hasn’t prevented him from being the soppy, sweet-natured lad we know him to be. And I hope it stays that way. I’m not sure any of us can cope with another visit from the vet! 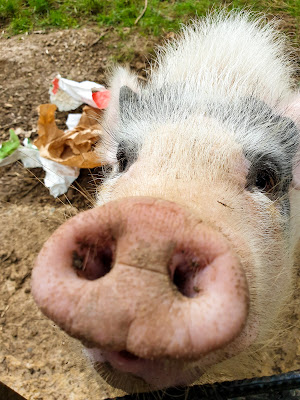