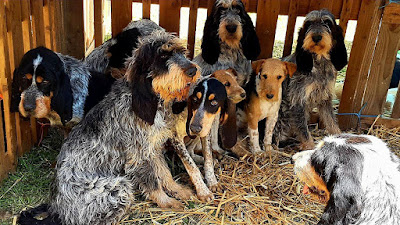 For some, Sunday mornings are relaxing, sadly not here. It’s that time when I reluctantly drag out the duster and other cleaning kit to do battle with the upstairs housework. Jack, my husband, has his routine which involves maintenance on our battalion of ageing machines. 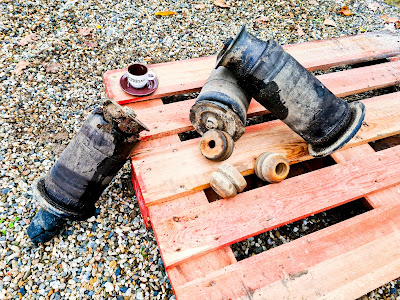 Last weekend our state of domesticity didn’t last long. Aby and Max, our Australian Shepherd dogs, signalled that something was amiss in that unique way of theirs. Chairs and cats went flying as Aby howled like a demented wolverine and Max hurled himself at the door. You’d never think they were a couple of softies.

I opened the door to the sound of baying dogs, tooting horns, and shouts. It’s an unmistakable clamour. The local chasse (hunt) had arrived. 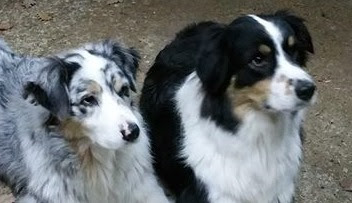 Jack, who had already reached the hunters, charged across the drive towards me. He was followed by an anxious-looking Jerome Bernaut, president of the commune hunting association. Jack was cross.

“Bloody hell, they’ve lost their dogs in the forest again. He says a boar has charged through part of the fence and they’re after it.”

“God knows, they certainly don’t. About five, they reckon, and they’re casting around the enclosed area.”

This didn’t bode well. About 300 acres of our land is enclosed by a two-metre high netting fence with supporting electric cabling.

Wild animals are free to come and go via the stream beds running through but may panic when pursued. For that reason, hunting is not permitting. Instead, we have designated the area as a nature sanctuary.

“Do you need me to do anything?”

“No, you’ll have to stay here in case any of them turn up. I’ll go in and get them with Jerome before they cause any damage.” 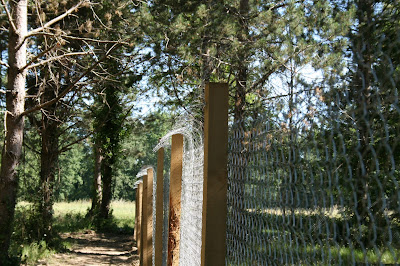 Jack took two orange-clad hunters to our 4x4 truck, and they trundled into the forest. Frustrated, but with nothing further for me to do, I rounded up Aby and Max and returned to the dreaded dusting.

Fairly soon after, the dogs started sounding the alarm. Once again, we were surrounded by the sounds of chaos. Much to their chagrin, I left Aby and Max in the house and went to have a look. This time, several hunters had assembled near the forest gate. 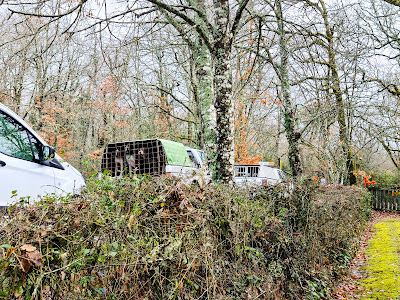 Oddly, Jerome, an amiable chap, was with them, which suggested he had been jettisoned by Jack somewhere along the way. I asked what was going on.

“We found three dogs,” he said, pointing at a car full of hounds, “so Jack has gone back to fix the hole in your fence.”

“Well done, but what about the other two?”

“That’s no problem, I have a GPS (global positioning system) thing on the collar of mine, look.”

Jerome proudly held up his tracking unit, which looked like a walkie talkie. It’s so unlike our local hunters to have new-fangled equipment. It was clear I was expected to comment.

“Gosh, this is an impressive piece of equipment, Jerome, is it new?”

“Yes, it’s very helpful. My dog has a sensor on his collar, and I receive a signal to show me where he is.”

“Well, it would be if it worked,” he said, tapping the dial.

“Um, if it’s faulty perhaps you could shout for the dog instead? We need to get them out of the forest as soon as possible.”

“No problem, I’ll soon have this working.”

Jerome started thwacking it on his knee.

“Batteries?” piped up, Bernard, one of his fellow huntsmen.

“No, don’t think so. I only replaced them two days ago.”

He squinted at the little screen. Sadly the whack hadn’t worked. Frustrated, he gave me a half-smile. 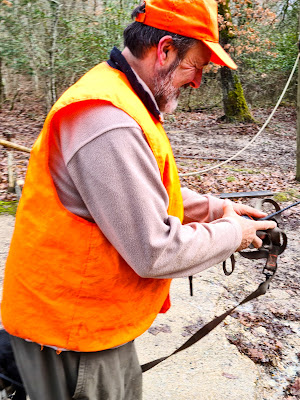 “Okay, this usually helps,” he said.

Turning to his truck, Jerome and gave it a bash on the bonnet. He peered again, as did I and his mate. It was pretty clear to us all what had happened. Jerome had killed his GPS machine.

Fortunately for his diminishing male pride, we turned to find his lost dog panting happily at the gate.

I opened it, and he padded up to his master. While Jerome was apparently technically challenged when it came to handling his GPS, he knows how to look after his animals. They are a lean and undeniably smelly lot, but well fed. And they dote on him.

After checking his youngster over for signs of injury, Jerome led him to the truck flatbed. I had already been having a chat with his other hounds, who were stashed away in multiple cages. 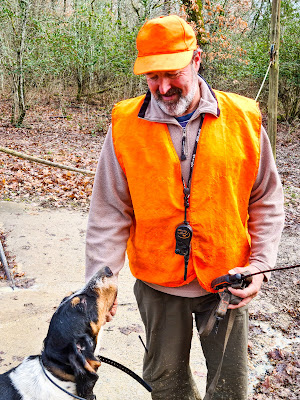 “They all look full to me, Jerome, which one does he fit in?”

“He must go in this cage on the right. They others will fight with him.”

“I see. The ones on the left are beauties, what breed are they?”

A small cage was above theirs. It contained one little dog.

“And what about this cute lad?”

“Ah, that one. This is a Jagdterrier, Beni, he’s one of my favourites.”

With that, Jerome gathered up his floppy-eared sweetie and bundled him into the correct compartment. Aside from a few introductory growls, they settled down nicely. 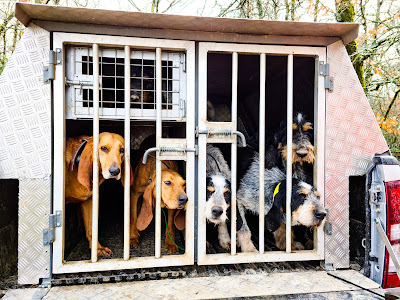 Meanwhile, Bernard (equally orange) was tapping a similar device. It seems he’d been given a GPS set for Christmas too.

“Is he close?” asked Jerome.

Bernard was thoroughly enjoying his latest pressie, which was lovely, but time was getting on, and we needed to get wailing Spiro out.

“Great,” I said, so he’s coming towards us. “Any idea of direction?”

“That way,” he said, pointing vaguely toward the forest.

“You have three tracks just inside the forest to choose from.”

“The centre one will do. I’ll have him back here very quickly.”

Bernard opened the gate. Still glued to his screen, he strode purposefully down the track. There was absolutely no doubt about it, his hound’s excited yips were coming from a completely different direction. At this rate, we’d be here all day.

“I tell you what, Jerome, why don’t I get my quad bike and we’ll take the trail on the right-hand side? That way, if Spiro changes direction, we might see him.”

A nod of agreement was all I needed. I got my bike, bundled a rather cumbersome Jerome on the back, and we set off into the forest. 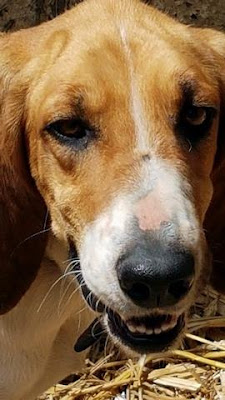 Finding Spiro took far less time than I anticipated. We had been driving for no longer than ten minutes when Jack appeared in the distance with a hunting dog tethered in the back of his truck. He was still looking grumpy.

“Is this the last one, Jerome, or are we going to be at this for another couple of hours?”

“Yes, it’s Spiro alright, you did well to catch him.”

This was a good point. Frustratingly, in our experience hunting dogs on the loose are famously tricky to catch up. They have no interest in stopping what they’re doing, least of all when it involves being stuck on the end of a lead.

“It wasn’t difficult. He was standing bawling at the fence for no particular reason, so I just looped the leash around him.”

Jerome wagged his head in a Yoda-like manner. Jack had evidently said something of great significance.

“This can only mean that the boar they chased in has gone out again at that point. You will have no more problems from our hounds today.” 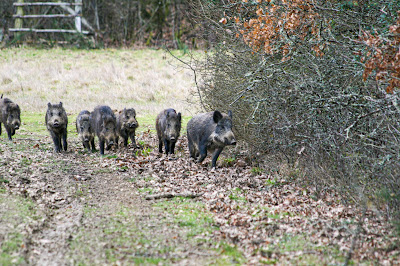 In such a large area with a multitude of different boar track scents, the likelihood of the hound following exactly the same boar was smaller than minuscule. I stared pleadingly at Jack to restrain himself from pointing out the blindingly obvious. It would only start an endless hunting debate. Fortunately, his reply was brief.

“There was no hole in the fence where I found him, Jerome.”

We returned to the cars and a new problem. All dogs were now accounted for, but we were now a hunter down. Bernard was still roaming around in the forest looking for his dog. Luckily, the only hazard he was likely to present was in terrifying a passing animal with his orangeness. Nevertheless, I suggested that we go and collect him.

“Oh, there’s no need to do that,” smiled Jerome, “he’ll see from his GPS screen that Spiro is back.”

“Not necessarily, Jerome, there are several areas in the forest where the signal cuts out because of tree density.”

“Never mind, I’ll ring him on his mobile phone.”

“Same applies, I’m afraid, Jerome. Come on; we’d better go back down and find him before it gets dark.”

Off they went, it was a while before they returned. Bernard was full of apologies and deeply disappointed with his intermittently working new toy.

Noisy and full of apologies, as usual, they departed in an explosion of barks, promising not to bother us ever, ever again.

I looked at my watch and shrugged, it was nearly lunchtime, and I needed to prepare a meal. No wonder I don’t get much housework done. At least the tranquillity of our forest had been restored.

As I returned to the house I couldn’t help wondering whether there was any risk of our local hunters getting the hang of their new gadgets. I rather doubted it. 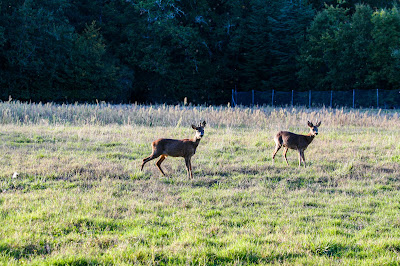