Sand, Surf and the Reluctant Holidaymaker

Was it an incident-free few days away? Well, nearly.

It usually takes months of gentle persuasion before my holiday-averse, grumpy husband finally caves in. He was quicker this time.

“Great, so we can go to Capbreton for a week?”

“Yes, yes, if only to stop you nagging about it.”

Capbreton, a quirky little seaside town on the south-west of France, is home to one of the best surfing areas in the world. The sandy beaches are endless, the dunes enormous, and when conditions are right, those cherished rollers are downright spectacular.

We arrived bright and early with our two bouncy Australian Shepherd dogs, Aby and Max. Access to the apartment from the underground carpark is via a lift. It’s tiny but quite posh with one side made of glass.

Despite this being their second visit, Aby still hasn’t got the hang of the moving world business. Shocked by the disappearing trees, she scored an early own goal by trying to fit into Jack’s jean’s pocket, which was never going to happen. Max, on the other hand, seemed keen to test the glass to find out if he really can fly. Fortunately, the glass is made of tough stuff. 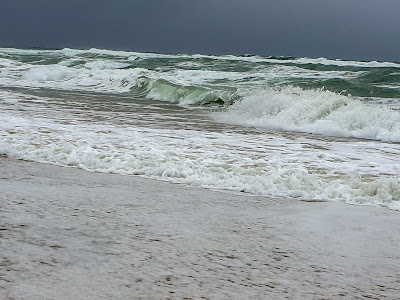 We reached the apartment more or less unscathed. It’s in a fantastic spot. Stuck right on the seafront, it has a balcony overlooking the Atlantic Ocean. I quickly unpacked, grabbed the dogs and left Jack with a coffee to help settle his post-lift experience nerves.

We knew the weather would be mixed during the week, but it wasn’t too bad when we arrived. Seafaring folks would probably call it a fresh breeze, you know, the type that blows your socks off. It’s probably why we had the beach to ourselves.

The dogs, thrilled at the feel of sand beneath their paws, played tag before racing helter-skelter towards the sea. Reaching the edge, they stopped, uncertain. They hadn’t seen ocean spume before, and The Atlantic was belching up lots that day.

Poor Aby, having only just recovered from her lift shenanigans, wasn’t at all sure about froth flying off the breakers. Max, wondering whether they were snacks delivered from Neptune, tested a couple. Nah! 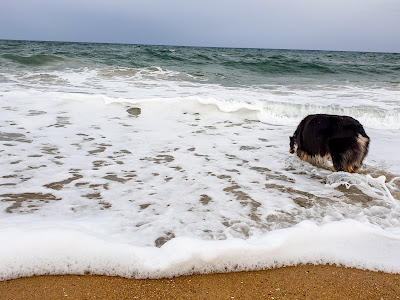 It was time to bring out the toys that make an Australian Shepherd’s happiness complete. Frisbees! Bounding around me, trying to work out which way I’d throw them next, frankly, it was anyone’s guess. It’s uncanny how these flying discs develop a mind of their own when cast from my hands, but they give the dogs a great workout. 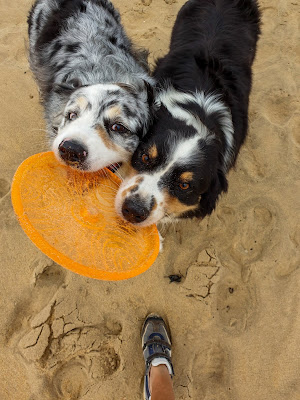 A squall increased the wind to seafarers ‘fresh’. The inevitable sandblasting of my face probably did a marvellous exfoliation job, but it wasn’t doing anything for my Frisbee-throwing technique. We packed-up and fought our ways back to our apartment, where Jack had rallied.

“Come on, let’s go and have a coffee, I could do with a snack. Erm, and you might want to tidy yourself up before we go.”

I had a quick look in the mirror.

“Ooh, no wonder the janitor looked a bit unnerved when I said hello to him!”

I looked like a Halloween horror story. A couple of shiners, courtesy of my drizzled mascara, hair that had transformed into a wire wool ball, and my cheeks were covered in multi-coloured grains of sand. That’s beach life for you.

The weather is apt to change very quickly here. In passing, the squall had blown holes in the grey skies, and we strolled in puddles of bright sunshine to a café nearby. The coffee is excellent here as are the tiny Madeleine cakes served alongside. And it wasn’t just us who wanted a nibble.

A sparrow family appeared intent on helping with the excess crumbs on Jack’s saucer.

“Would you look at this lot,” he grumbled, “can I ever get a moment’s peace from animals?”

Jack (wannabe animal-hater) immediately donated half his to the delighted flock while continuing to moan about his tortured life with animals.
Our lazy days continued in a similar vein; dog walks followed by meals and extended coffee breaks, one of which featured a lady who stopped to admire Max.

“I must stroke your dog,” she gushed. “Bernese mountain dogs are so much nicer than Saint Bernard’s, and she is a lovely specimen.”

Now, while this was all very kind, as a passionate Aussie lover, I always feel obliged to enlighten others about the breed. The gender mix-up needed sorting out too. I was a sparrow’s toenail from putting her right when Jack interrupted (he’s heard me drone on about the breed values before). 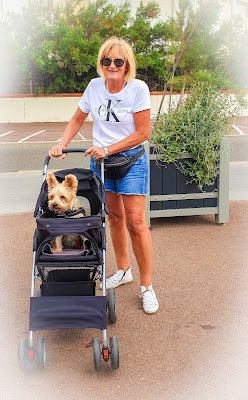 “Do you always take your dog for walks in a pram, madame? ”

“Ah no, monsieur, but today he is tired.”

With that, she gave us a cheery wave and wheeled her pooch away.

“I suppose it wouldn’t have fitted in her handbag,” he muttered at the departing stroller.

September is an ideal time of year to visit Capbreton. The summer season has finished, and the kids have gone back to school, so it’s much quieter. The restaurants are still open, though, which gives diners an almost endless choice.

Being a doggy place means that restaurant owners are very welcoming. Dog bars (bowls of water) are positioned strategically, and mutts are generally posted under tables or in handbags, out of other diners’ ways. It’s ideal for us.

We are seafood lovers. Oysters may be gloopy-looking to some, but they are a particular fave of ours, especially the Gillardeau variety offered here. Uber-healthy, they are consumed in vast quantities by customers. 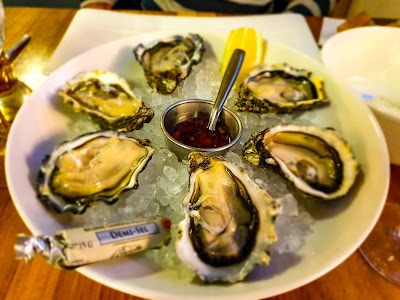 Similar to this palate-teasing pair, all our meals turned out to be culinary triumphs. But it wasn’t just the food that turned heads. 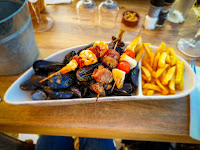 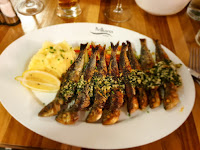 For a couple of country bumpkins, Aby and Max are surprisingly well behaved when we eat out. Galloping 15-25 kilometres each day after disappearing Frisbees probably helps. They’ll lie under our table snoozing with half an eye open, ready to field a falling scrap. It’s a tidy arrangement. Mind you, this all changes when attention is shown, which I maintain it’s not their fault. Jack doesn’t agree.

We had settled down to another seafood bonanza. Table set nicely with drinks just delivered by the kind chap, who paused to tousle the dogs’ heads. An innocent error. 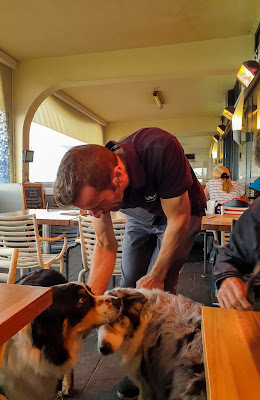 Aby and Max were thrilled. Our table erupted as they scrambled out to welcome their new best friend. This had predictable consequences. Jack had a tantrum as his beer followed the same route as the dogs, and I got tangled up in dog leads in my efforts to retrieve them.

Fortunately, the waiter was very understanding. He survived the canine welcome, gave them a log of bread each, and supplied us with new beers and napkins. Jack gave him a big tip at the end. We ate there several times.

Later on, we decided to explore the old harbour to have a look at the food producers. Traditionally a whaling port, nowadays it is packed with battle-hardened trawlers. 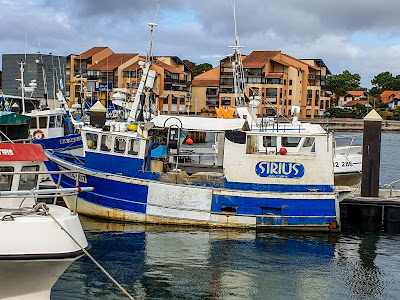 On the dockside, fishmongers were preparing their catches for sale. I was captivated by one magnificent lady. Amazon-like, this seasoned fish-stacker effortlessly lobbed her catch around like feathers. I certainly wouldn’t have messed with her. 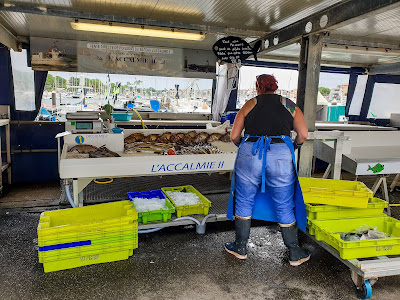 As the week wore on the weather changed. It was glorious now, but the swell was still high, which meant the old pier was too dangerous to use. How on earth the skippers of those small trawlers negotiated entry into the port beat us, those seas were huge. 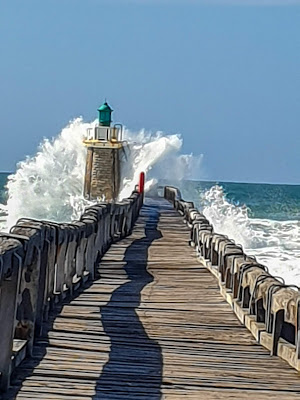 We sat on a bench with a couple of ice creams, waiting for the next boat to negotiate entry. For some strange reason, an ebullient lady draped in a floaty kaftan (possible ex-surfer) eyeballed Jack and planted herself next to him. Apropos nothing at all, she launched into a discussion about the local birdlife, which was more of a speech, really.

Then, to his horror, she announced she wanted to show him something special. Before he could respond, she started rummaging around the folds of her frock and plucked an IPad from a voluminous pocket.

“Here, you must look at my darling,”

“I can see you will love him. Everyone does. This is Siberus, my pet wolf. He is famous.”

Yes, it really was a wolf, something to do with The Game of Thrones. I was riveted, but not Jack. He was distinctly underwhelmed. I’ve never seen a grown man consume an ice cream so quickly. Wallop! Down it went. We made all sorts of appreciative noises about her beloved and escaped.

Poor Jack. He was still looking a bit twitchy about the entire social encounter, so I left him in the apartment to recover and took the dogs for a ramble. 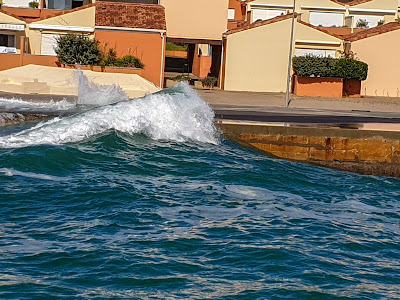 We headed to one of my favourite beaches. Backed by immense dunes, the shoreline seems endless. And it has a remarkable collection of features.

During World War II, the occupying Nazis built a series of blockhouses as defences against the Allied invasion. As it happens, the concrete structures were unused. Now they serve a happier purpose as home to curious crabs and other crustaceans, and easels for graffiti artists. 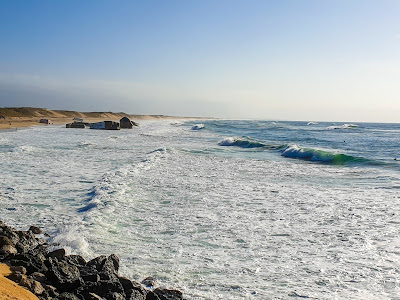 The dogs and I had a closer look. The art had changed from last year. The new messages about saving the planet were a brilliantly ironic twist. There’s no doubt, the French are passionate about protecting their environment. 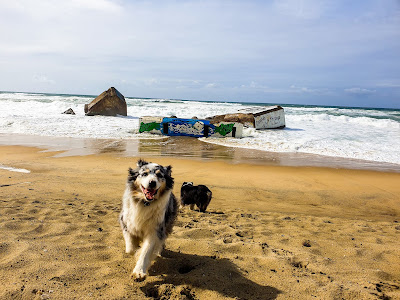 The whitecaps on this beach were incredibly impressive. Rubber-clad surfers were strewn all over the place; riding the white horses, in them, or napping on the beach, spent after a watery pummelling. 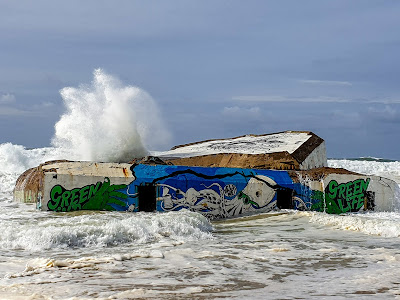 A couple of pretty French girls wandered up, one clutching a surfboard that looked heavier than the pair of them. They asked if they could stroke the dogs. I nodded, knowing what would be going through Aby and Max’s minds. A cuddle? Rrrreesult!

I asked how the surfing was going. The lass with the board replied in English.

“The waves, they are confusing, it is too hard.”

“Yes, they bump into each other, I cannot stay on my board. Today, it is my first go.”

“Have you tried the other beach? The surf might be easier there.”

“I will drown! These waves, they are three times bigger than me, I will definitely die.”

Her friend gave her a quick hug and suggested she have one final go on their beach.

“No, I am too tired now, I will probably die here too.”

That was that then. We all decided it was far better to enjoy the beach and play with dogs in the sun instead of facing imminent death. We took some pics and parted. A gorgeous pair of girls, who I sincerely hope didn’t bother with that surfboard again during their holiday. 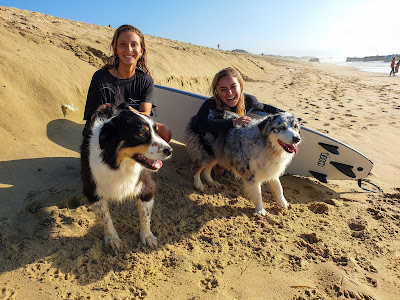 Our final day was peerless. We made the most of it with another trek. Watching the surfers, it struck me that there’s an awful lot of bobbing around. Clearly, I have no real idea of what’s involved, but I presume they are waiting to ‘catch a big wave’, and it can be a long wait. 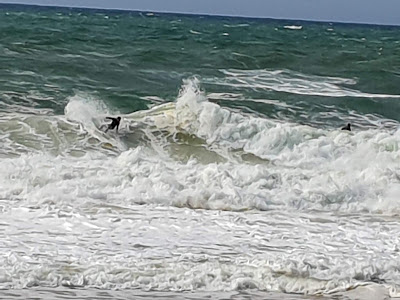 Every now and again, a gigantic barrel wave appeared way offshore. Cresting, growing, curling into a monstrous cask of immense force, it peaked before smashing back into the sea. Surfers appeared on top, sometimes through the middle, but more often than not in the folds of the wave. It was mesmerising. No wonder these courageous sportspeople need naps. 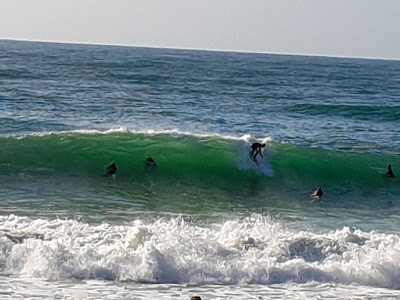 Our week came to an end too quickly. One last Frisbee session, one last shared portion of heavenly oysters and a head of hair that now resembled a cat’s hairball. It had been a fantastic few days. And did Jack enjoy it? Well, aside from one incident I'll tell you about in my newsletter, yes, of course, he did!