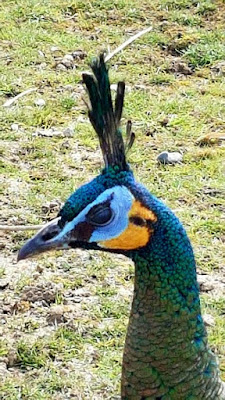 It’s not every day one sees a big blue peacock perched on a tractor. It’s one of my early memories after coming to live in our rural pocket of France, which suggested things might not be entirely conventional around here. Happily they aren’t.

So when my sister, Di, said she wanted to buy her animal-loving neighbours something a bit different, a breeding pair of peacocks came to mind. We decided they would go very nicely with their llamas, who are excellent lawn mowers and defend their chickens against foxes. 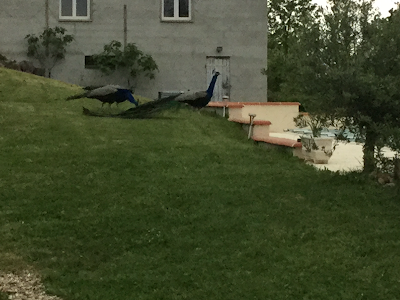 Our next task was to find a breeder. I asked the tractor peacock farmer where he had bought his. He said he hadn’t. They just turned up one day and stayed. We both agreed this was probably perfectly normal and I scurried off to seek sane advice from Google.

Amazingly, I found a breeder in the Gers, a department adjoining ours. Full of confidence, I wrote to the gentleman who immediately stumped me by replying with the following sensible questions:

Which breed of peacock did I want?
Did my sister’s neighbour have other peacocks nearby?
Did I want mute – or singing birds?
Would the birds be in an aviary or at liberty? 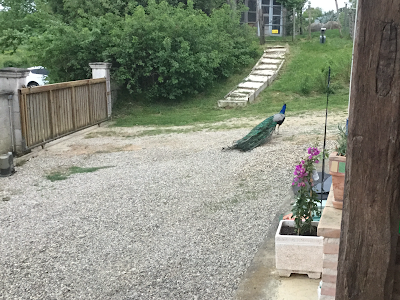 Embarrassingly, I had no idea which specific type we would want. The peacock-owning farmer lived fairly close, but his birds didn’t seem to shift much so I didn’t think they would be a problem. I thought all peacocks wailed. However, I knew they would be at liberty – hanging out with the llamas.

I confessed my scant knowledge, and arranged a meeting with the owner to view his stock.

Di and I headed off bright and early on our mission. Gers is a department known for its gourmet food and temperate climate; of equal appeal is the gorgeous countryside. 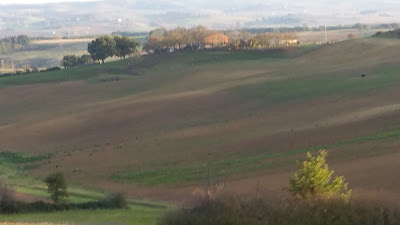 We were quickly immersed in rolling landscapes decorated by pretty medieval villages, each a gem screaming out for a visit. Fields would soon be filled with sunflowers as far as the eye could see, adding a smiling face to the already radiant scenery. It may be one of the least densely populated areas in France, but we could easily understand why it attracts so many visitors.

After driving for an hour or so our satnav system gave up the ghost and resorted to a display of limp white lines and no directions. We were in such a rural area the map detail wasn’t much use either. This was annoying. We knew we were close, but had to seek advice.

Asking a question is often tricky as the local accent is so hard for me to understand. The other problem being that I have great difficulty pronouncing the French word for peacock, paon. Looks easy, doesn’t it? The problem is, pronounced incorrectly, it sounds very like several other words. 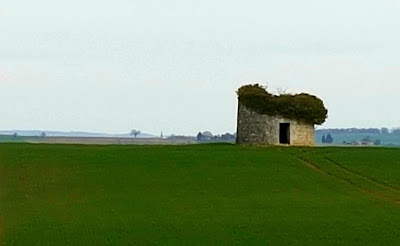 We drew up alongside an immensely old lady who was feeding her goat on the roadside. I asked in French if she knew where Monsieur Delacroix, the peacock breeder lived.

“Éleveur de pain?” she asked, looking thoroughly confused as she would because she thought I had asked for a bread breeder. I tried again.

Clearly there was something fundamentally wrong with my pronunciation. I took a deep breath and spat out a word that sounded like pong.

Bless her for trying. This time she thought I was talking about a bridge. Life was too short for me to continue massacring the language and Di had begun tutting impatiently. There was only one thing for it. I resorted to charades.

I apologised again, this time blurting out a word that sounded like payom, accompanied by a goodly flapping of arms. Madame stepped back in surprise, grabbing her goat’s string protectively. She stared hard and then crinkled up into a perfect wrinkly smile.

Eureka! The lady did not know the man’s name, but she knew there was a peacock breeder nearby and pointed along the same road.

We waved our kind helper goodbye, and resumed our journey. Soon after, a property with several aviaries came into view. Heaving sighs of relief, we pulled up alongside a big metal cage housing exotic birds.

Monsieur Delacroix appeared and we introduced ourselves. It quickly became evident that he didn’t speak English. Di is at starter-French level so she was in charge of approving murmurs while I did the talking.

He gestured towards the big aviary.

“You can go in but you must be calm.”

I shot a warning be calm glance at Di, who was beaming soundlessly and monsieur positioned us in the middle of the cage. 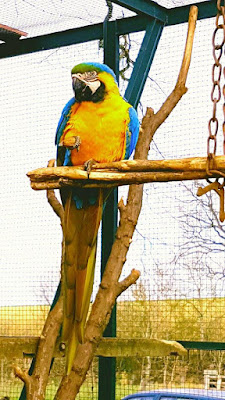 Now here’s a thing about parrots I hadn’t considered before. Some are very large. As monsieur walked towards them they started shrieking meaningfully and whizzing around the cage, flapping tremendously long wings. These were birds to be respected, as were their extra-long talons. 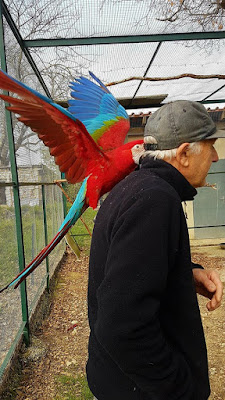 One alighted on monsieur’s shoulder.

“This is Simba, the female. She is jealous of you.”

“No, it’s okay, but do not provoke her or she will attack.” 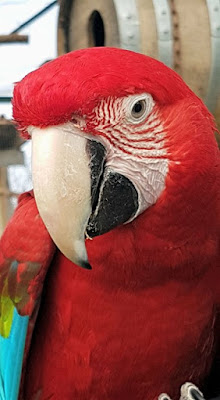 We stood rigidly to attention, trying to look relaxed as the unbelievably beautiful Simba started lovingly nibbling her owner’s ear. 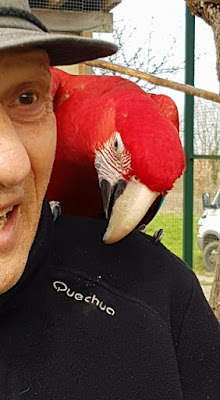 “Simba, no!” cried monsieur, gently waving the huge beak out of the way. “They can break a finger with these beaks, you know,” he added cheerily.

We oohed quietly. I looked at the massacre of walnut shells on the ground and then his earlobe. I didn’t fancy its chances if she decided to give it a kiss. 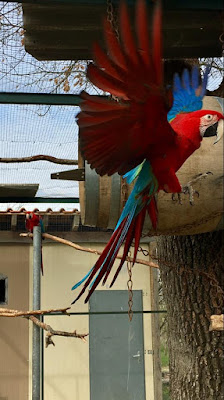 As monsieur continued to wrestle with the aptly-named Simba’s loving advances, the other parrots flew from perch to perch. We watched, amazed by their extraordinarily colourful plumages, their inquisitive behaviour and raucous candour at our presence. 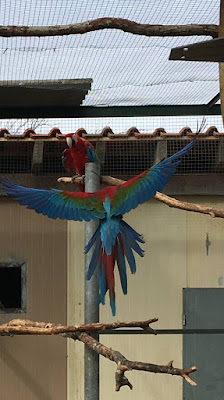 Simba eventually became overly frisky so monsieur motioned for us to go. We avoided bodily injury and followed him to the first of a long line of aviaries. I noticed they were all padlocked. We were soon to find out why. 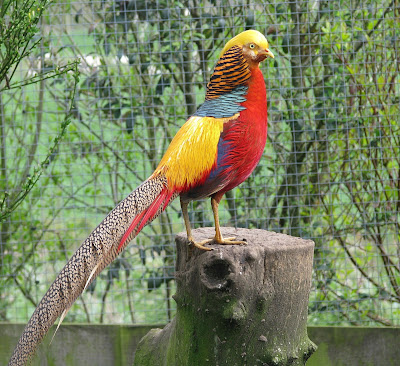 The first couple contained golden pheasants. I know this species, but they were new to Di. She wowed at one of the males. His red-tipped golden crest extended along his head to his neck. His bright red underparts and snazzy gold and green rump confirmed this lad was out to impress. Conversely, his mate was dressed-down. Coy, mottled brown and buff feathers covered this female, ideal for concealment in her natural habitat.

We watched these restless creatures patrol their pens. They were mixed in with other, less garishly-painted pheasant species. All visually stunning in their own ways. 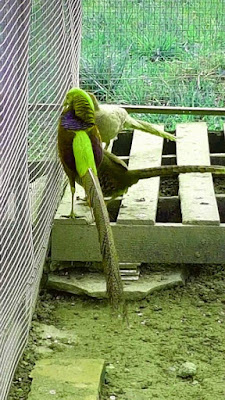 “And now I will show you my peacocks,” monsieur smiled.

Pen after pen contained these fabulous members of the pheasant family. We were allowed to enter most, watching intently as the magnificent birds strutted their stuff. Monsieur described the different species he kept. The first were Javanese. 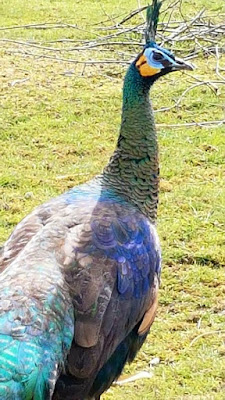 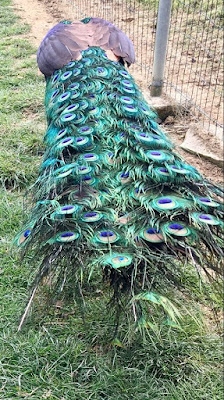 Also known as Green peacocks, the male’s heads and crests shone with verdant green. The peahens, also brightly coloured with green hues, were only slightly muted compared to their mates. They were kept as breeding pairs or young families. Heated shelters protected them from adverse winter temperatures, and expansive, grass-covered enclosures gave them ample room to exercise. 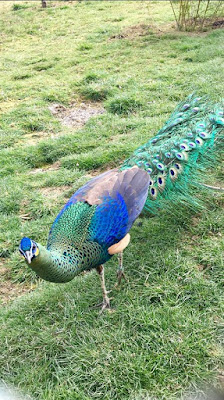 Monsieur pointed to an adult male in the pen adjoining ours. We looked across to see one of the males fanning his tail feathers. 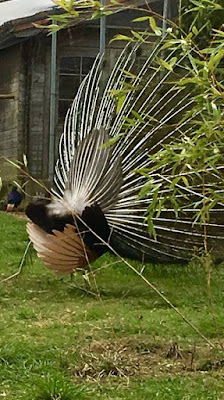 “You have come at exactly the right time,” he said. “The males are beginning their courting displays.”

We went over to look, entranced by the billowing tail feathers covered in blue-green eyes. Soon other males began to sense spring was in the air. Many copied, outshining their competitors next door. I ambled ahead, still glued to these amazing creatures, when a strange rustling sound came from behind. 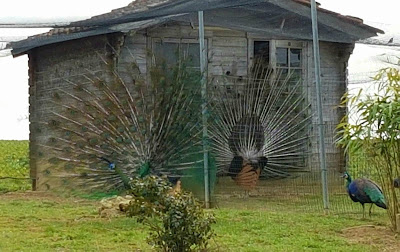 I wheeled around to find myself uncomfortably close to a very bulky, foreign-looking turkey. It stared at me with puffed up feathers and started advancing, making rapid gobbling sounds. There was no point backing away, I was already pinned up against a Green peacock pen. Feeling distinctly anxious, I decided there had to be a better way to go than death by a massive bird with a pendulous skin thingy hanging over its beak. 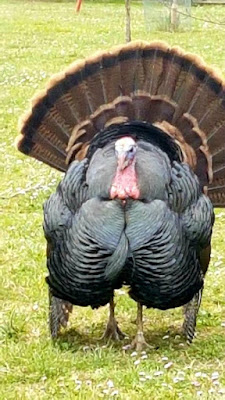 “No problem, he’s harmless,” said monsieur, spotting my apprehension. “This is one of my Canadian wild turkeys, he is very friendly.”

Mightily relieved, I watched the tank-sized bird, with its duvet of browny-black feathers cackle around us. I didn’t know whether it was capable of flight, but if so it would look like a B52 in the air. 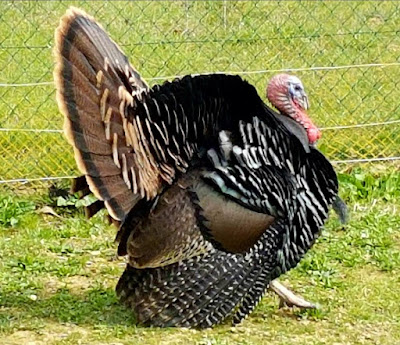 We returned to the finesse of the peacocks, this time the Indian blues from Sri Lanka. The male’s iridescent cobalt heads and necks dazzled, outdone only by their fabulous trains as they unfurled their tails, fanning them alluringly at their mates. 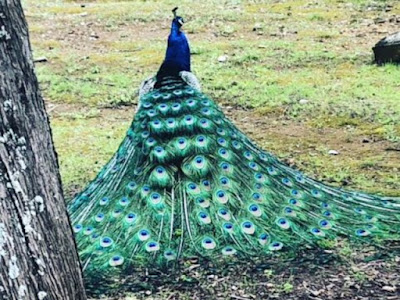 “These birds are rustic,” monsieur explained, “they can withstand hard winters. You can buy this pair if you want, they are five years old.” 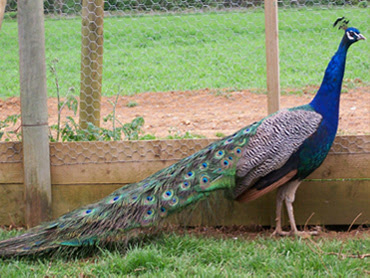 I duly translated to Di, whose eyebrows shot up to her hairline.

“Have you seen the length of its tail?” she hissed. “We’ll never get it in the car! Ask him if he has any 6-monthers that’ll fit into a normal bird carrier.”

My question was drowned out by a boisterous cawing.

“Ah, he has seen us. You must come to see my latest bird, I rescued him,” said monsieur, pointing towards the din.

As we walked over, he told us the bird, a Military macaw, had been kept by an old lady in a tiny cage for years. He opened the pen and beckoned us in. 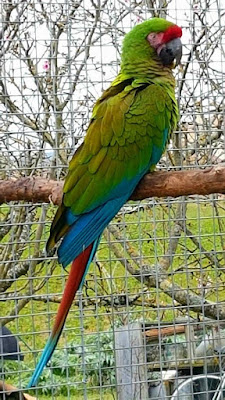 “I am afraid he is mad now, his space was too restricted. He tried to kill the mate I put with him last month. You must stand very still or he will attack you.”

Mildly concerned about my ears, I translated to Di who was halfway in.

“Not another killer,” she muttered, before stopping and abruptly stepping back outside. She’s not stupid.

We paused to observe this astonishingly striking animal, terribly saddened by what had happened, but so glad he had been saved.

The final pen contained an assortment of chickens.

“Here we have some English!” chuckled monsieur. 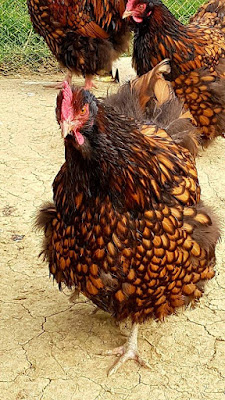 I had read about these but never seen them. Great big, fluffy Pekin chickens waddled contentedly around their compound. We were in raptures. 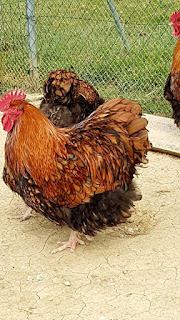 With our tour finished, we thanked monsieur for giving us so much time.

“My pleasure. At this time of year I love watching my birds mating. They are my passion. Wait, I have something to show you,” he added, disappearing into his house.

Di gave me a very old fashioned look at that translation, suggesting we perhaps ought to leave now if he was at risk of showing us something inappropriate.

Monsieur returned with a book filled with photographs and information about the mating rituals of peacocks. His words did make sense. These animals were as graceful as they were ostentatious during the breeding season. No wonder he loved them so much.

We thanked him again and returned home with more questions than answers.

Sadly there was no prospect of buying youngsters from monsieur so we had several considerations to tackle. Would we find a way to safely transport the five-year-old peacocks back? Was it a sensible idea to buy mature animals? Were there alternatives? Fat chickens? These were decisions we would soon make.

In the meantime we agreed one decision had been well made. We had spent a wonderful morning in the company of an expert peacock man. 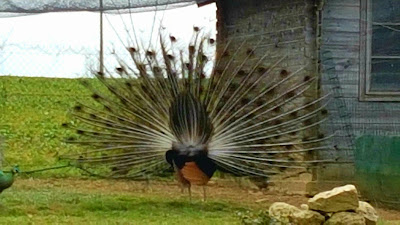